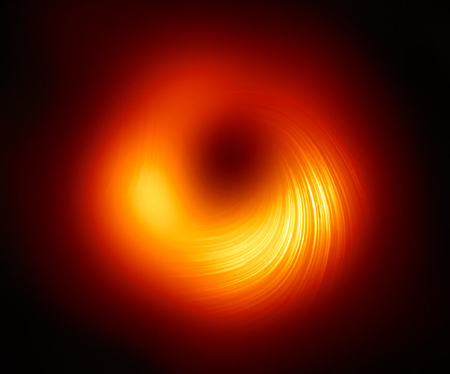 The image to the left, reduced to post here, shows the spiraling magnetic field lines against the bright event horizon ring.

As the Event Horizon Telescope (EHT) team describes today in a pair of papers in Astrophysical Journal, the new picture uses the same data as in the original image, produced from a series of observations in 2017 of the supermassive black hole at the core of nearby galaxy M87, using the combined collecting power of eight radio observatories across the world. To extract the polarization information, the data have gone through many months of additional analysis.

The scientists also note that the orientation of the field lines might eventually help explain the jets being thrown from its poles.