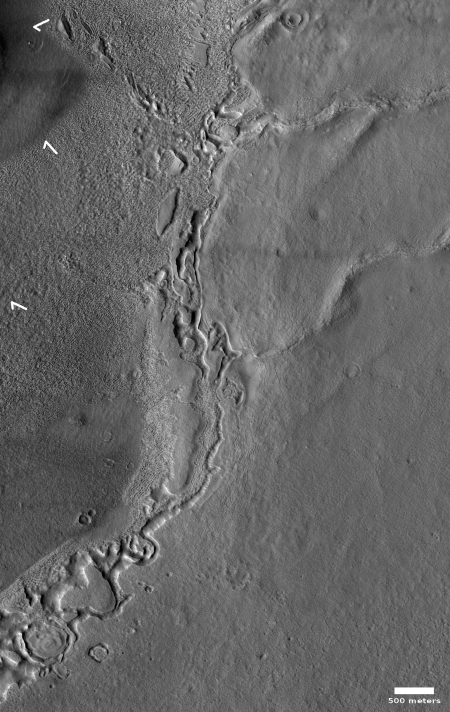 Cool image time! The image to the right, rotated, cropped, and reduced to post here, was taken by the high resolution camera of Mars Reconnaissance Orbiter (MRO) on April 6, 2020.

The image shows the dying edge of a debris flow coming down from a mesa, the edge of which can be seen as the dark slopes in the upper left. The white arrows point up slope. It is located in the chaos terrain of a mid-latitude region called Deuteronilus Mensae, in the transition zone between the southern highlands and northern lowlands, where many such glacial-like features are found. I featured a similar nearby glacial edge only two months ago, where the image showed the glacier’s break up and collapse at its edge.

Here, the debris flow isn’t breaking up so much as crumbling away, its edge a line of meandering depressions, with the uphill slope covered with many knobs and tiny depressions, reminiscent to me of the many features I see in caves, where the downward flow of water shapes and erodes everything to form cups and holes and knobs, all the same size. If you click on the full resolution image and zoom into that debris slope and then compare it with the linked cave formation photo, you will see the resemblance.

We are almost certainly looking at a buried inactive glacial flow coming off that mesa, though it appears to be eroding at its foot. The overview image to the right shows the context, with the red dots indicating this image as well as similar features in adjacent mensae regions (featured in the linked images above). While the chaotic and rough terrain found along this transition zone does not make them good first settlement sites, the ample evidence of vast reservoirs of buried ice, combined with a variety of topography, will likely someday make this good real estate for those living on Mars.