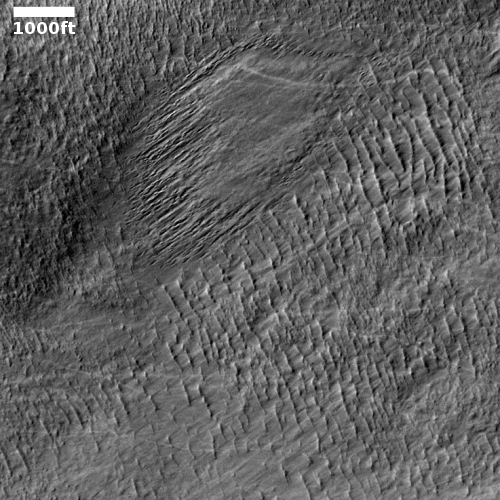 Today’s cool image takes us to the Death Valley of Mars, Hellas Basin, a place I like to call the basement of Mars. The photo to the right, cropped and reduced to post here, was taken by the high resolution camera on Mars Reconnaissance Orbiter (MRO) on September 28, 2020, and gives us another example of the very strange and inexplicable geological formations that are often found on the floor of Hellas.

The picture was taken not as part of any particular research project, but somewhat randomly for engineering reasons. In order to maintain the proper temperature of MRO’s high resolution camera, it must take images in a regular cadence. When large gaps in time occur between requested images, the camera team then picks locations to fill those gaps, sometimes randomly, sometimes based on a quick review of earlier wide angle images.

I think the photo to the right falls into the latter category. Though the terrain covered by the full image is largely flat and lacking in large features, the surface is strewn with perplexing small details.

The light streaks might be dust devil tracks, but why are they light here when such tracks are routinely dark everywhere else on Mars? What formed the many parallel small ridges? What caused the smooth solid patch near the photo’s center top? And why do the ridgelines at the western edge of that patch run in almost a perpendicular direction to the other ridges? 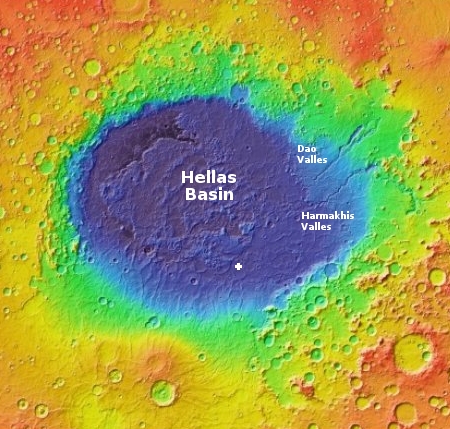 One interesting fact about Hellas Basin is that though it spans the southern mid- latitudes from 28 to 55 degrees, the exact band where scientists have found numerous glacial features in both the north and south hemispheres, there are no such features in Hellas. In fact, Hellas is very dry, even though to its east are numerous glacial features coming down from the canyons Dao and Harmakhis, and to its south are numerous scarps with exposed pure ice layers visible.

This lack of water in Hellas is likely related to the basin’s low elevation. On Earth we would assume the lower elevations are warmer, causing the ice to melt away. On Mars might also be true, with the ice sublimating away to leave no water behind. This however is merely a wild guess. Mars is an alien planet, so any assumptions we make based on Earth are very risky, and are often wrong.