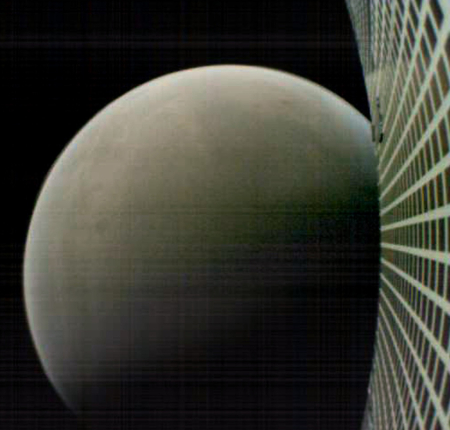 The two MarCO cubesats that successfully relayed data from InSight to Earth during its landing yesterday continue to function, with one even sending back images. The photo on the right, cropped and reduced slightly to post here, was taken by MarCo-B.

Neither of the MarCO CubeSats carry science instruments, but that didn’t stop the team from testing whether future CubeSats could perform useful science at Mars. As MarCO-A flew by, it conducted some impromptu radio science, transmitting signals through the edge of Mars’ atmosphere. Interference from the Martian atmosphere changes the signal when received on Earth, allowing scientists to determine how much atmosphere is present and, to some degree, what it’s made of.

“CubeSats have incredible potential to carry cameras and science instruments out to deep space,” said John Baker, JPL’s program manager for small spacecraft. “They’ll never replace the more capable spacecraft NASA is best known for developing. But they’re low-cost ride-alongs that can allow us to explore in new ways.”

As a bonus, some consumer-grade cameras aboard MarCO provided “drive-by” images as the CubeSats sailed past Mars. MarCO-B was programmed to turn so that it could image the planet in a sequence of shots as it approached Mars (before launch, MarCO-A’s cameras were found to be either non-functioning or too blurry to use).

This engineering test proves that we don’t need to build billion dollar spacecraft every time we wish to send an unmanned scouting ship to another world. Cubesats will soon do the job quite well, and for a tenth the cost.

And there will be a lot of money to be made. Governments and private entities of all types will be eager to buy the services of the garage-built planetary cubesats that private companies are going to soon be building, in large numbers.