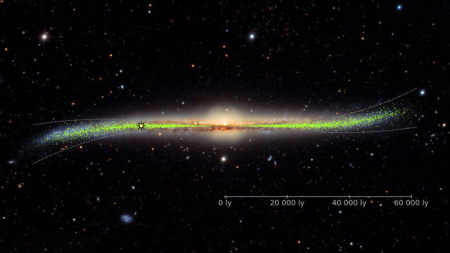 Astronomers mapping the locations of one kind of variable star in the Milky Way have found that, based on that data, our galaxy appears to be warped.

To make the map, astronomers looked to its bright, pulsing stars called cepheids. These stars burn up to 10,000 times more brightly than the sun so they are visible from across the galaxy and through interstellar clouds of gas and dust. Crucially, cepheids are “standard candles”: Their light waxes and wanes at a rate that corresponds to their inherent brightness. Astronomers can combine their true brightness with their apparent brightness, measured from Earth, to calculate how far away they are. Using a 1.3-meter telescope at Las Campanas Observatory in Chile, astronomers monitored the steady pulses from more than 2400 stars and pinpointed their location on a 3D model of the galaxy.

…From above, the Milky Way can be seen as a spiral-shaped galaxy, but this spiral disk doesn’t sit flat on the galactic plane. The cepheid stars cluster along an S-shaped curve, showing that the Milky Way’s disk is more warped than previously thought.

The image above shows this warp, with the star indicating where the Sun is located. The green dots represent cepheid variable stars. 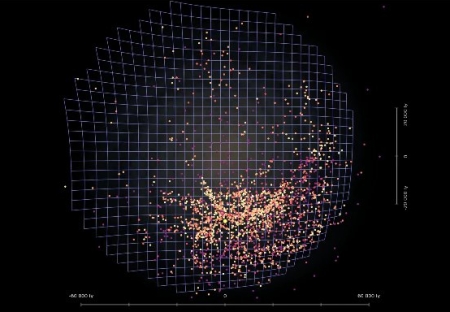 This science is good, but there are uncertainties. For example, a top view of the galaxy, showing the location in yellow of all the cepheids mapped, is to the right. Notice the strong bias to one side of the galaxy, where the Sun is located. Their information for the rest of the galaxy is very spotty.

The available data might show this warp, but I think it is premature to assume it accurately maps the entire shape of the Milky Way.