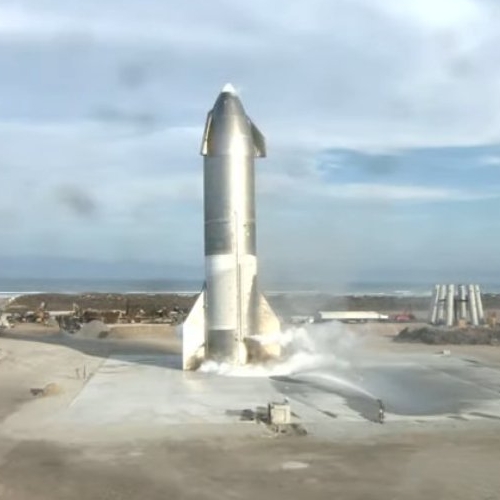 Capitalism in space: SpaceX today successfully completed the first test flight of Starship prototype #10, not only completing the launch and descent manuevers but also successfully landing the prototype vertically on the landing pad.

The flight was similar to the previous two in that the spacecraft rose very slowly, hovered at about 6 miles, and then did a flip to place itself horizontal for its descent. Then as it approached the ground it righted itself as it fired up three engines (to make sure at least one worked), and then shut down two so that one engine brought the spacecraft down smoothly.

Next comes prototype #11. Its flight should occur with only a matter of weeks. 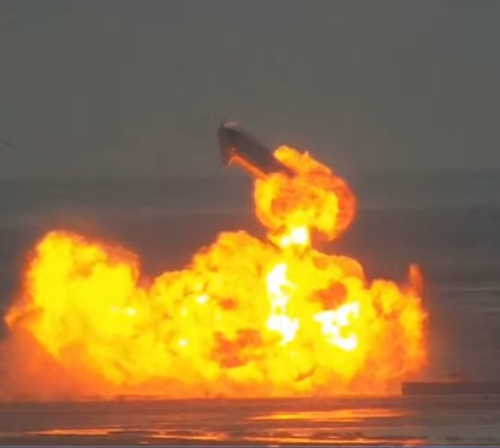 Starship #10 on its way down after exploding.

UPDATE: A few minutes after landing the prototype exploded, flinging itself off the launchpad. No word yet on why this happened, but I wonder if maybe this was a planned self-destruction. They don’t plan to fly this bird again, and it takes up a lot of storage space. Blowing it up saves space, though it does destroy material that could be salvaged for other uses.

To the right is a screen capture from one of LabPadre’s live streams, shortly after the ship launched itself from the pad and was on its way down. It only went up about two hundred feet.

If this wasn’t planned, SpaceX needs to figure out why this happened. Either way, we shall certainly find out in the coming days.

Below is SpaceX’s video of the entire flight. Enjoy!