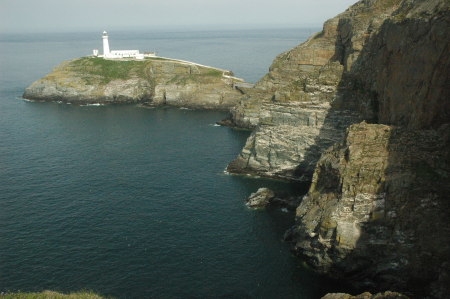 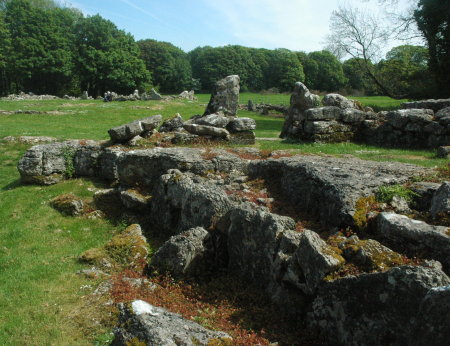 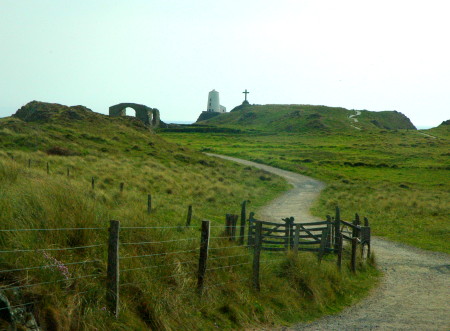 Our journey through Wales continues. Today, as with yesterday, we explored the island Anglesey, which forms the northwest corner of Wales.

The day began going to Anglesey’s northwest coast to hike north to the South Stack lighthouse, as shown in the top right image. At this resolution you cannot see them, but the greyish-green rock faces rising one third to halfway up these cliff faces are covered with thousands and thousands of birds, including the guillemots, razorbills, chough, and puffins. Among them also stalks the herring gull, which is hoping to pick off an easy meal by grabbing the young offspring of the other birds.

We walked about two miles along these high dramatic cliffs to the lighthouse, which unfortunately was closed today because it had been reserved for an elementary school class trip.

We then drove to the little visited ruins of Din Lligwy (don’t ask me to explain how to pronounce it), shown in the second image to the right. These ruins are hidden behind trees on a high hill overlooking the part of the Irish Sea north of Wales and are what is left of a Welsh/Roman village. The ruins include the circular stone structures used as foundations for Welsh homes as well as the square stone wall/foundations used by the Romans. It is thus thought that after the Romans conquered Wales and before their abandonment of the British Isles the Romans intermarried with the Welsh and added their architectural designs to that used by the Welsh. The image shows the largest square foundation, with the two standing stones delineating the building’s entrance. To the left, out of frame, is a Welsh circular structure that to my eye looked exactly like a kiva that one sees in all the American Indian ruins of the southwest.

After visiting a number of other ruins, we then headed to the island’s southernmost point, to the peninsula of Ynys Llanddwyn, also called Dwynwen’s Island. It is no longer an island, because in the 1400s a giant storm, followed by several more, dumped a gigantic amount of sand along the shore, thus extending that shoreline several miles seaward and connecting the island to the mainland.

The bottom picture shows the peninsula’s distance lighthouse, and the ruins of a church (the arch) built to honor Dwynwen, who had been a Welsh princess. According to legend, she had been betrothed but fell in love with another man, who when he found out about the betrothal attacked her. This broke her heart, and she ended up running away to live unmarried on this island for the rest of her life, dedicated to helping unhappy lovers. For this she was made the patron saint for lovers by the Catholic Church.

To visit all these sites required us to cross Anglesey practically from the top to the bottom, generally traveling secondary roads. The land was a gentle rolling terrain, covered with numerous small farms whose amazingly lush and well-kept fields were devoted almost entirely to grazing sheep and cattle. The villages were all small, whose packed trim homes were either built during the 1800s or built to fit that style. Overall I got the impression that though this part of Wales might not be wealthy, its people had a strong sense of civic pride.

Tomorrow we head to Mount Snowden and the mountains. The scenery should get a bit more dramatic.