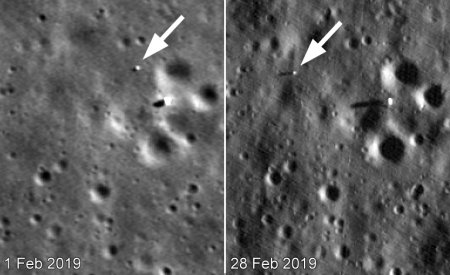 A new image from Lunar Reconnaissance Orbiter (LRO) shows the path taken by the Chinese lunar rover Yutu-2 during its second lunar day of travel on the Moon. The LRO images on the right, cropped and reduced in resolution to show here, compares the rovers position at the start and end of February. The white arrow indicates the rover, with its Chang’e-4 lander visible between the three craters to the east. As noted by the LRO science team:

LRO passes over any given place on the Moon at least once every month (in the daylight), allowing the westward progress of the Yutu-2 rover to be seen. At the end of February, Yutu-2 was 69 meters from it’s home base, the Chang’e 4 lander; LROC images show Yutu-2 made 46 meters of westward progress during the month of February.

It appears from these orbital images that they are taking the smoothest route, with the fewest obstacles, away from the lander.