Keith Cowing at NASAWatch reports in detail about the unanimous approval of the amended Senate budget for NASA. The final budget appears to have raised the funding for commercial space development to match the Obama request, while adding one more flight to the shuttle schedule and mandating an immediate start of work on some sort of heavy-lift rocket.

Our freedom is under attack, and it isn’t being destroyed by an evil dictator with storm troopers.

Why I don’t watch television news
July 15, 2010 at 9:29 am Robert Zimmerman Points of Information

This story illustrates nicely why no one should trust the reliablity of any news reporting they see on television or cable. Key quote:

Back in late-1989, I contended that the U.S. economy was in or headed into a deep recession. CNBC had me in to discuss my views along with a senior economist for a large New York bank, who was looking for continued economic growth. Before the show, the bank economist and I shared our views in the Green Room. I outlined my case for a major recession, and, to my shock, his response was, “I think that pretty much is the consensus.” We got on the air, I gave my recession pitch, and he proclaimed a booming economy for the year ahead. He was a good economist and knew what was happening, but he had to put out the story mandated by his employer, or he would not have had a job.

More recently, following an interview on a major cable news network (not CNBC), I was advised off-air by the producer that they were operating under a corporate mandate to give the economic news a positive spin, irrespective of how bad it was.” And now you know that watching stations like CNBC for anything more than just comedic value is hazardous to your health and wealth.

Space war over? Eric Berger of the Houston Chronicle reports today that there are signs that the White House might agree to the Senate’s budget proposal for NASA, released earlier this week.

The space war over NASA’s future continues. Now 24 former astronauts have written a letter to Senator Barbara Mikulski (D-Maryland), endorsing the idea of allowing the private commercial industry to take over the manned space program of the U.S.

Still have doubts whether the climategate investigations were awhitewash? Then read this blistering condemnation by Clive Cook, senior editor at The Atlantic and a global warming advocate.

Lunar conference at Ames
July 14, 2010 at 11:17 am Robert Zimmerman Points of Information

The third annual Lunar Science Forum is being held July 20-22 at the Ames Research Center in California. The list of papers, some of which are quite intriguing, can be found here. Fun quote from one abstract: “Purity levels of the ice suggest a degree of comingling of ice and regolith grains within the permanently shadowed crater.”

This collection of links gathered by Glenn Reynolds of Instapundit illustrates clearly that the Obama administration is in deep trouble, not just on its proposed changes to NASA but on almost every other issue it has tackled. The links also illustrate how incredibly tone deaf this administration continues to be when it comes to politics.

Bolden pushback against White House
July 14, 2010 at 10:27 am Robert Zimmerman Points of Information

Who is lying? Is it NASA Administrator Bolden or White House spokesman Robert Gibbs? NASA officials continue to insist that Bolden’s claim that foreign outreach is one of NASA’s main tasks is true, despite Gibbs’s denial.

Update: More indications that NASA had planned some sort of outreach to Muslim nations, under White House direction.

Toyota cars did not have a sudden acceleration problem
July 13, 2010 at 3:55 pm Robert Zimmerman Points of Information

The National Highway Traffic Safety Administration has found that all but one of the approximately 3000 incidents of out-of-control acceleration involving Toyota vehicles were because of driver error, not mechanical problems. In other words, the accusations that there was something fundamentally wrong with the Toyota vehicles was false.

Greenland icecap is not melting
July 13, 2010 at 2:25 pm Robert Zimmerman Points of Information

Steve Goddard has posted on Anthony Watt’s webpage a very detailed update on the state of the icecap covering Greenland. Surprise! There are no signs of it disappearing anytime soon. (Note that you might have to scroll to the right to see the text of Goddard’s post, as on some computers Watts’s webpage is unfortunately far too wide for the screen.)

The Lunar Reconnaissance Orbiter has sent back some amazing pictures of some recently discovered caves on the Moon. I like this one the best. 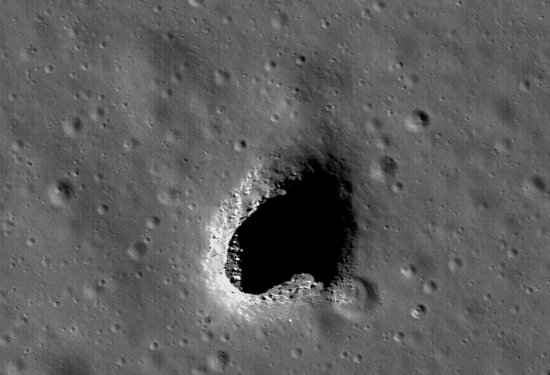 Astronomy near the North Pole
July 13, 2010 at 11:32 am Robert Zimmerman Points of Information

Scaled Composites has posted the full test flight log for all of WhiteKnightTwo’s test flights, through July 1, 2010. The logs strongly suggest that the company is moving quickly towards its first full flight of SpaceShipTwo.

India launches five satellites in one heave
July 13, 2010 at 10:44 am Robert Zimmerman Points of Information

India successfully launches five satellites in one heave. Even cooler, one of the satellites, STUDSAT, was built by students! Nor is that all. Immediately after the launch, India’s space agency head lobbied for a manned space program for India.

The White House is now denying Bolden’s claim that Obama gave him the task to reach out to the Muslim world.

Here’s a nice picture from the HiRISE camera on Mars Reconnaissance Orbiter, released July 7, showing the boulder tracks left by rocks bouncing down the escarpment of Kasei Valles in the low gravity of Mars. Fun quote:

Some of these blocks traveled downhill several hundred meters (yards) as they rolled and bounced, leaving behind a trail of indentations or poke marks in the surface’s fine-grained, light-toned soils. The raised borders in some of these poke marks indicate they are relatively recent features, unaffected by wind erosion, or that this soil has cohesive properties, such as if it was cemented. 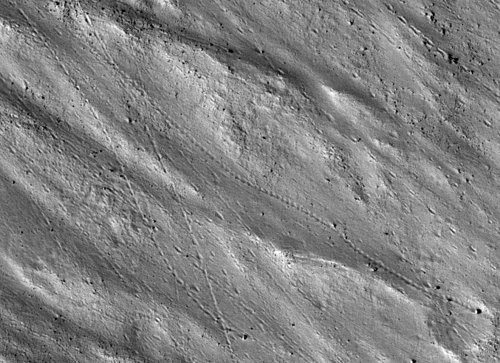 The space war continues. Several members of the Columbia Accident Investigation Board have written a letter to Senator Barbara Mikulski (D-Maryland), endorsing in principle the goals of the Obama proposals for NASA.

Scientists are shocked, shocked, to discover that it doesn’t matter whether the Republicans or the Democrats are in power, governments like to interfere with the free flow of information and with scientific research.

Death sentence for suggesting a cartoon
July 12, 2010 at 11:21 am Robert Zimmerman Points of Information

Islam once again demonstrates its tolerance. The cartoonist who first proposed and then backed off from the “Everyone Draw Mohammed Day” has now been threatened with death by an Islamic cleric/terrorist.

The space war continues
July 12, 2010 at 9:05 am Robert Zimmerman Points of Information

The space war between Congress and Obama continues.

Jeff Foust analysis of the New Space business
July 12, 2010 at 8:58 am Robert Zimmerman Points of Information

Jeff Foust of the Space Review has written an excellent analysis today explaining why some new space companies have succeeded (SpaceX) and some have failed (Rocketplane). Key quote:

If your business plan requires hundreds of millions of dollars of investment, and your founders don’t have that money available themselves, it may be wise to reconsider that plan in favor of an effort that can bootstrap itself with much less funding.

Ikaros successfully accelerated by the Sun
July 11, 2010 at 11:19 pm Robert Zimmerman Behind The Black, Points of Information

The Japanese space agency has announced that their solar sail spacecraft Ikaros has successfully increased its velocity using only the light from the Sun, the first time this has ever been done by an interplanetary spacecraft.

The space war continues. This article by Lee Roop of the Huntsville Times gives an excellent summary of the precarious political position of NASA’s manned space program.

Fired for his beliefs
July 11, 2010 at 5:54 pm Robert Zimmerman Behind The Black, Points of Information

Liberty of conscience? What’s that? A University of Illinois teacher has been fired because of his religious beliefs.

overruns at JWST
July 11, 2010 at 3:23 pm Robert Zimmerman Behind The Black, Points of Information

I was out in West Virginia this weekend for the monthly gathering of the Germany Valley Karst Survey. This project has discovered and mapped more than 37 miles of virgin cave passage in West Virginia in the past eight years. For the last two years I, along with about a dozen other project members, have been focused on a dig in a small cave that has the potential to break out into a lot of virgin passage. Below are two pictures taken by fellow caver Daniel Martinez, the first showing me at the cave entrance and the second showing my feet as crawl in. 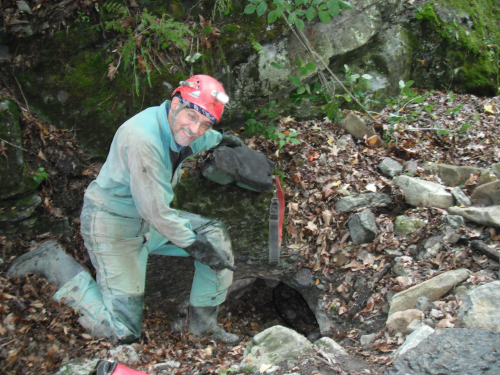 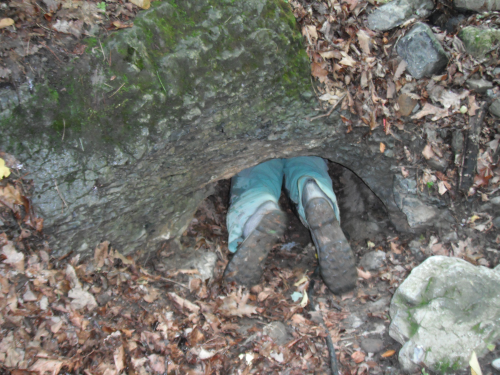 Check out the Rosetta flyby images.

A dark and stormy night
July 10, 2010 at 7:04 pm Robert Zimmerman Behind The Black, Points of Information

The 2010 Bulwer-Lytton Fiction Contest has been awarded, given to the writer who comes up with the worst opening sentence for an imaginary novel. This year’s winner, Molly Ringle, achieved the honor with this gem:

For the first month of Ricardo and Felicity’s affair, they greeted one another at every stolen rendezvous with a kiss — a lengthy, ravenous kiss, Ricardo lapping and sucking at Felicity’s mouth as if she were a giant cage-mounted water bottle and he were the world’s thirstiest gerbil.

Go here to see the runners-up, all of which are worth it.

Climategate whitewash
July 10, 2010 at 3:53 pm Robert Zimmerman Behind The Black, Points of Information