Blacklists are back and the Democrats have got ’em: For the crime of representing President Donald Trump during the post-election fervor from November 2020 to January 2021, John Eastman has not only been fired as a teacher by Chapman university back in January, more than 250 professors who belong to the American Political Science Association (APSA) have now petitioned that organization to blacklist and censor both Eastman as well as anyone associated with him.

A September 23 letter, signed by over 250 professors and graduate students, accused Eastman of being part of an “attempted coup.” … David Karpf, a professor at George Washington University, organized the letter. “John Eastman has violated our discipline’s professional ethics by participating in the dangerous attempt to overturn the institution of electoral democracy in the United States,” the political scientists wrote.

The letter then demanded that the APSA “strip John Eastman of APSA membership” as well as sever all ties with those supporting him.

This last demand by these professors forced the APSA to kick out of its convention the live presentations by the Clairmont Institute because Eastman was giving two of those presentations.
END_OF_DOCUMENT_TOKEN_TO_BE_REPLACED 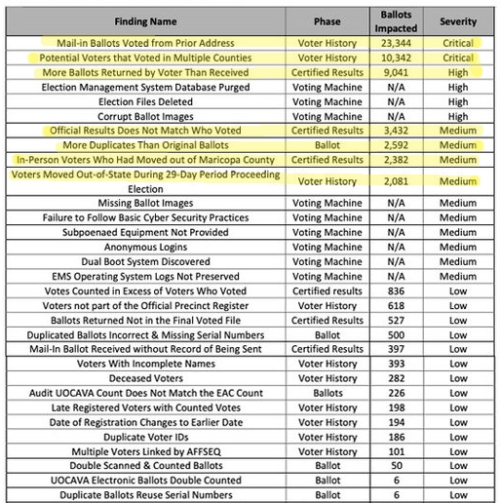 Now that the election audit of the biggest county in Arizona is complete and released, it is necessary to look at what it found. This article does a nice job of summarizing the audit’s conclusions, which in total make it very clear that a lot of corruption and incompetence occurred in the 2020 election in Maricopa County, some of it possibly bordering on outright election fraud.

The graph to the right, from the audit, illustrates this. In twenty-two different categories the audit found votes that should not have been counted because they were illegal or invalid in some manner. Of those, seven categories described illegal or invalid votes totaling more than 53,000 votes, five times the 10,457 vote margin of Joe Biden’s victory in the state.

Does this meant Trump won Arizona? Who knows? The audit did not determine the number of illegal or invalid votes that went to either candidate. What it did find, however, is that the entire voting system is corrupted and untrustworthy, and must be fixed.

The audit results have also revealed why the election officials in Maricopa County have been fighting this audit from day one. They clearly knew the election system was untrustworthy, and wanted to hide this fact, either to protect themselves from prosecution or to maintain their ability to defraud the voters.

They’re coming for you next: Along with all other former Trump officials being blackballed by today’s dominant leftist culture, former Trump deputy assistant Sebastian Gorka has found himself banished, first from Fox News, and then from Google’s YouTube.

While Gorka’s problems at YouTube were in the past related to copyright disputes, the final ban last month was simply part of that site’s effort to censor any legitimate discussion of election fraud during the November 2020 election. From their own spokesman:

“In accordance with our long standing strikes system, we terminated the channel America First with Sebastian Gorka, for repeated violations of our presidential election integrity policy,” Ivy Choi, a YouTube spokesperson, wrote in an email to The Hill. … “As we’ve publicly shared, our presidential election integrity policy prohibits content uploaded after last year’s safe harbor deadline that alleges widespread fraud or errors changed the outcome of the 2020 U.S. presidential election,” Choi wrote. “Any channel that violates this policy will receive a strike and channels that receive three strikes in the same 90-day period are permanently removed from YouTube, as in the case of America First with Sebastian Gorka.”