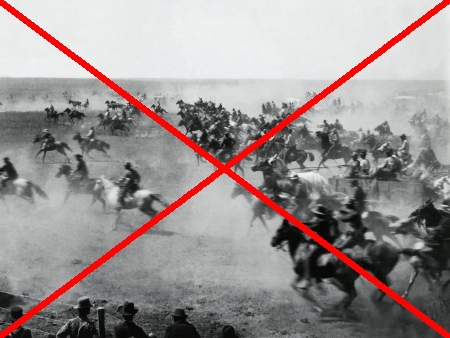 They’re coming for you next: A local community college in Oklahoma has removed a monument that commemorated the pioneers who settled the state in the 1800s because some people complained it was “not inclusive.”

The monument depicted the Oklahoma land run of 1889, which occurred on the day the U.S. government opened Oklahoma up to homesteaders for settlement. Apparently, there were complaints about this depiction on social media (which usually translates as a Twitter mob) as well as threats of violence. The college’s response to these mob threats?
END_OF_DOCUMENT_TOKEN_TO_BE_REPLACED

They’re coming for you next: Because one student had the nerve to criticize the Black Lives Matter organization, based on what it itself claims are its goals, the Georgetown University Student Association Senate Student senate passed a resolution condemning that specific student and demanding that everyone at the university fall into lockstep support for that Marxist, racist movement.

This is what the future holds. Note that it isn’t the teachers or college administrators calling for this student’s silencing (though I am sure they applaud it), but the students themselves. The modern generation requires oppression and intolerance of dissenting opinions. It does not believe in free speech. It believes instead in tyranny.

This quote from the article sums up the situation, at least at Georgetown University:

Jacob Adams, secretary of Georgetown Republicans, also told Campus Reform that “students are routinely harassed online by their peers for contrarian opinions at Georgetown. It is not a good college environment for conservatives or simply people who disagree with whatever is the prevailing political push. As it stands right now, I would not recommend Georgetown to any prospective student, and I would strongly discourage alumni from donating to the university until they clearly demonstrate Republicans and conservatives are welcome on campus.”

There is one ray of hope, though one that is incredibly depressing in many ways. Too many American colleges have become havens for this kind of intolerance. They are also finding survival difficult if not impossible under the oppressive rules imposed due to the Wuhan virus panic. The result might be that these havens of intolerance might go out of business.

It couldn’t happen fast enough. The problem is that it will be a trade of one form of oppression for another.

Because of a severe drop in attendance, the University of Missouri has cut staff and reorganized departments, and in the process it appears that it might have finally cut the job of one of the professors who attacked reporters during the mob protests in 2015.

Where in Mizzou is censor Janna Basler? Director of the Office of Greek Life when she bullied and intimidated student journalist Tim Tai for doing his job – covering the race protests that swept the University of Missouri nearly two years ago – Basler was the subject of a formal complaint by a journalism professor who said she “tried to incite a riot.”

That didn’t stop her from getting promoted to associate dean of student life last fall. Now, it appears Mizzou’s financial woes have given the school an excuse to can the remaining employee who attacked journalists in November 2015.

Basler’s profile disappeared from a staff page in the wake of a departmental reorganization that merged part of the Division of Student Affairs into the Division of Operations, a move intended to save $1.5 million.

The more famous Melissa “I need some muscle over here!” Click left the university soon after the riots, but soon got a job in the communications department at Gonzaga University in Washington state, where I am sure she continues to teach students how to shut down debate and stifle freedom of speech.

The fate of Missouri, which has had its attendance crash since the 2015 riots, should be the fate of Evergreen, and Berkeley, and Gonzaga, and every college whose administrations condone violence and thuggery in order to stifle debate.

Link here. The first two reasons are illustrated forcefully by the madness we have recently seen in many college campuses, where mobs of screaming thugs take over and drown out anyone who wants to discuss the issues at hand rationally.

The last two reasons are less noticeable but more economically important. Combined with the first two reasons, expect there to be a collapse in attendance at colleges in the coming years.

Fascists: A new review of free speech on campuses across the United States has listed the country’s ten most oppressive colleges, with examples of why they earned this odious status.

The first link is the actual report, while the second provides a good quick summary. In either case, the behavior of college officials in attempting to squelch dissent is quite disgusting. Far more horrifying and worrisome for the future were the number of cases where the students themselves moved to stamp down on opposing views. They are the future, and that future does not look pleasant.

Some good news: In South Carolina students are suing their college for interrogating them for daring to hold an event in support of free speech that offended some students.

Modern fascism: Christian clubs at California colleges have been banned because the clubs insist that their elected leaders must be Christians.

“We have no issue with anybody of any kind of race, religion coming to our weekly meetings and being a part of who we are,” San Luis Obispo Missionary Leader Jamey Pappas said. “It’s a question of who’s going to be leading our students in a Bible Study, mentoring them individually, or deciding what kind of content goes into our weekly meeting, and we want people who agree with what we’re about.”

More evidence that the concept of freedom of association is dead in America, and with it freedom itself. The result here is that it is impossible to have a religious organization on these campuses. (Note that the Islamic clubs have joined with the Christian clubs to fight the policy.)

Since I have no doubt that atheist and gay clubs accepted this policy knowing that college administrators will look the other way if they discriminate because they are considered “politically correct,” I think these religious clubs should test the policy for real. Pick an atheist club and swamp it with religious members so that a religious person gets elected as leader. We will quickly find out that the real intent of these policies has nothing to do with preventing discrimination but to squelch the freedoms of traditional American values in favor of new ideologies.

A Hispanic student group at Northwestern University instructed members of the campus community to forgo eating tacos and drinking tequila on Cinco de Mayo, so as not to offend Mexican culture. But Mexican students, who indeed wanted to spend their holiday eating tacos and drinking tequila, took offense at the assumed offense. The Hispanic student group ended up with huevo on its face.

The U.S. Departments of Justice and Education today demanded that every college and university in the United States establish strict speech codes that would violate the First Amendment and decades of legal precedent.
May 15, 2013 9:24 pm Robert Zimmerman

In other news: The U.S. Departments of Justice and Education today demanded that every college and university in the United States establish strict speech codes that would violate the First Amendment and decades of legal precedent.

You voted for it: College adjunct professors crushed by Obamacare.

More colleges have announced plans to drop their student healthplans due costs imposed by Obamacare.
June 4, 2012 10:51 am Robert Zimmerman

Repeal it! More colleges have announced plans to drop their student healthplans due costs imposed by Obamacare.

Lenoir-Rhyne University of Hickory, N.C., the University of Puget Sound in Tacoma, Wash., and Cornell College in Mount Vernon, Iowa—all private liberal-arts colleges—have told students they are dropping school-sponsored limited-benefit insurance plans starting in the fall. The three colleges said students’ premiums would have gone up roughly tenfold, and they said they could no longer justify making students sign up if they didn’t have their own insurance. [emphasis mine]

And if they don’t drop their healthplan?

The State University of New York at Plattsburgh said its 2011-2012 premium was $440 for a plan that covered up to $10,000 for each injury or sickness. Officials said the premium for the coming year would be $1,300 to $1,600 for a plan that meets the new requirements. The school will continue to require students to carry insurance, either through the school or not.

How’s that hope and change working out for you, students?

Some good news for freedom of speech: the University of Virginia has elminated all of its speech codes.

This analysis of college admissions practices reveals that colleges discriminate badly against students from rural communities, merely because they are from those communities. Key quote:

Participation in such Red State activities as high school ROTC, 4-H clubs, or the Future Farmers of America was found to reduce very substantially a student’s chances of gaining admission to the competitive private colleges in the NSCE database on an all-other-things-considered basis. The admissions disadvantage was greatest for those in leadership positions in these activities or those winning honors and awards. “Being an officer or winning awards” for such career-oriented activities as junior ROTC, 4-H, or Future Farmers of America, say Espenshade and Radford, “has a significantly negative association with admission outcomes at highly selective institutions.” Excelling in these activities “is associated with 60 or 65 percent lower odds of admission.” [emphasis mine]

Amazing isn’t it? If you grow up in a rural American community in flyover country, do well as a teenager by participating responsibly as a leader in the kinds of after-school activities popular in rural communities, elite American colleges are going to hold that against you.

The article also describes bigotry against whites and asians (for racial reasons) as well as individuals with a military background. It is worthwhile reading the whole article.