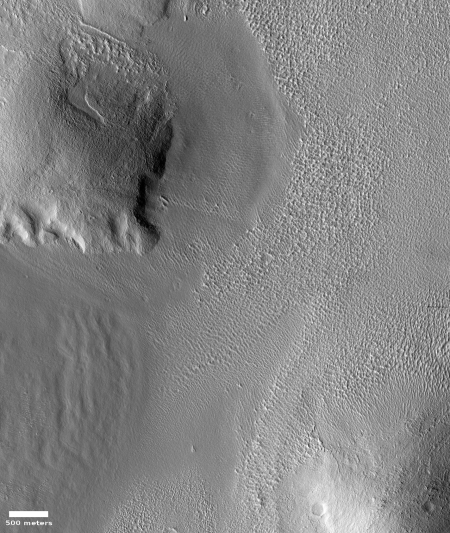 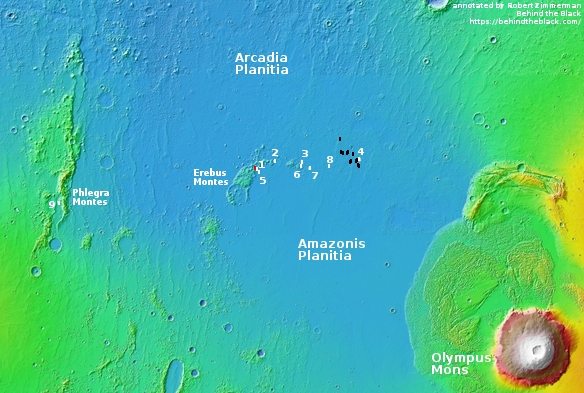 Cool image time! Today we return to the Erebus Mountains, located just to the west of SpaceX’s prime candidate landing site for Starship on Mars. The photo to the right, taken on April 4, 2020 by the high resolution camera on Mars Reconnaissance Orbiter (MRO) and rotated, cropped, and reduced to post here, shows one particular area between the peaks in those mountains, and also happens to be very close to what I have labeled image #1 in SpaceX’s Starship landing site photos.

The second image below and to the right shows an overview map of this region, with the SpaceX photos indicated by the numbered white boxes and the location of this image indicated by the red box, right next to image #1. The black boxes were images that SpaceX had obtained from MRO earlier, when it was first planning to send a Dragon capsule to Mars using a Falcon Heavy, a project the company has put aside in its focus on building Starship.

To my eye, everything in the first image above reeks of an icy, glacial terrain. I certainly am guessing, but it is an educated guess based on looking at numerous similar images in this region (see here and here, ) as well as in the nearby Phlegra mountains to the west. I also base my guess on what I have learned interviewing planetary scientists who are studying these images. The reasonableness of this guess is further strengthened in that the location is at 39 degrees north latitude, dead center in the mid-latitude bands where scientists have found evidence of numerous buried glaciers.

If Starship lands just to the east of the Erebus Mountains, the first colonists will likely not only have water available at their feet close to the surface in the flat lowland plains, if they find that resource insufficient they will need only climb uphill a bit into these hills to dig out as much ice as they could ever need.

Embedded below the fold in two parts.
END_OF_DOCUMENT_TOKEN_TO_BE_REPLACED