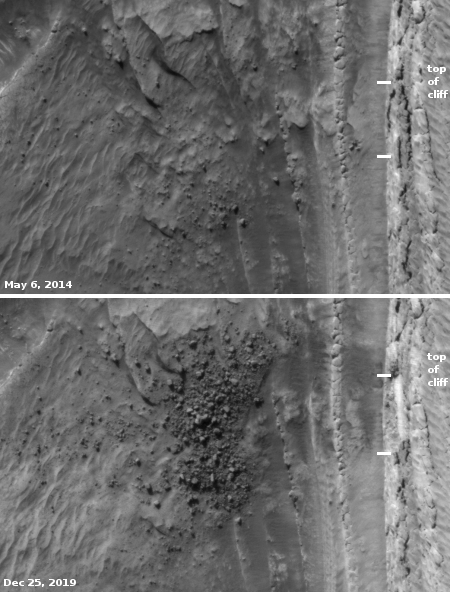 Cool image time! The science team for the high resolution camera of Mars Reconnaissance Orbiter (MRO) today released a beautiful blink animation showing the before and after terrain at an avalanche site along the scarp of Mars’s north pole ice cap.

The animation is very cool, but it is also helpful to align the two images next to each other to carefully study what actually changed. The image to the right, cropped and reduced here, shows both photos. (Thank you to planetary scientist Shane Byrne for splitting the animation for me.). I have added the white bars to indicate the cliff section that broke off during the avalanche. That section was made of water ice, with probably some dust and rocks mixed in, and broke into the blocks that are now scattered on the ground below.

This avalanche itself is actually not unusual and as I noted in an earlier post, is part of an annual season of numerous avalanches that occur on this northern scarp of the polar ice cap each spring. As written by Dr. Candice Hansen of the Planetary Science Institute in Tucson, Arizona,

Every spring the sun shines on the side of the stack of layers at the North Pole of Mars known as the north polar layered deposits. The warmth destabilizes the ice and blocks break loose. When they reach the bottom of the more than 500 meter tall cliff face [about 1,600 feet], the blocks kick up a cloud of dust.

And as Byrne noted to me in an interview when I asked him how it was possible for MRO to image so many avalanches, as they occur,

“It is incredible. I think this is the most incredible thing about the whole process.” said Byrne. “If you fly over a mountain range on the Earth and take a picture, the chances catching an avalanche in progress are almost zero. But on Mars half of the images we take in the right season contain an avalanche. There’s one image that has four avalanches going off simultaneously at different parts of the scarp. There must be hundreds to thousands of these events each day.”

In an email exchange with him today, he also added that this is not the first before and after comparison images obtained. “We’ve been seeing these blockfalls for several years now. That’s partly why these scarps are being so intensively monitored by HiRISE.”

Do these avalanches mean that the Martian northern polar ice cap is shrinking? Maybe, maybe not. Right now scientists think the cap is in a steady state, neither growing or shrinking. These events are thus more likely comparable to the routine calving of ice sections from the foots of glaciers here on Earth, a common tourist destination in the waters of western Alaskan coast.