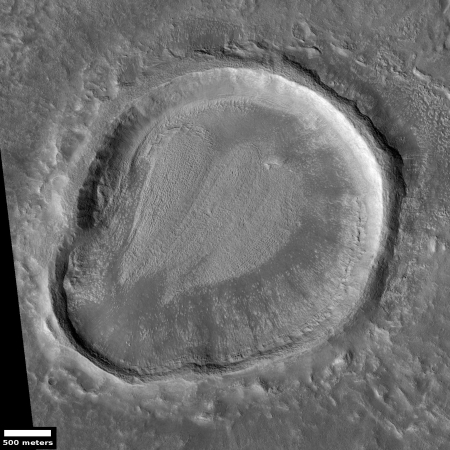 Cool image time! In a sense, to announce that scientists have found an oddly shaped crater on Mars is to state the obvious. In the years since the first Martian fly-by by Mariner 4 in 1965, scientists have been discovering numerous odd-shaped craters on Mars, every single of which has challenged our assumptions about the planet’s geology. I myself have posted a half dozen such posts since January (January 7, January 10, January 14, March 26, March 27, June 12).

Yet, it is always worth looking when another one crops up, because of the fact that they challenge our assumptions about Martian geology. They are also always cool to look at! On the right, cropped and reduced to post here, is an image taken by the high resolution camera on Mars Reconnaissance Orbiter (MRO) on April 19, 2019 of what the scientists have dubbed an “Odd Shaped Crater in Arabia Terra.” 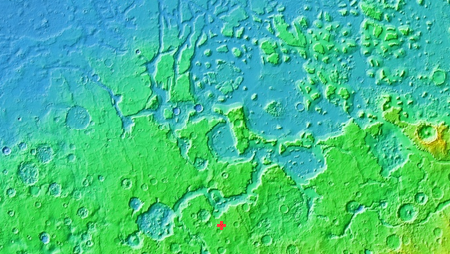 Arabia Terra is one of the largest regions of the transition zone between the northern lowlands and the southern highlands. This crater is located, as shown by the red cross in the overview map to the right, near its northern edge, in an area where the descent into the northern lowlands is somewhat abrupt and broken up by large craters and chaos terrain.

The crater itself holds numerous geological mysteries. Its shape suggests two impacts of different sizes overlapping each other, but without any remnant of the inner rim of the second impact. Where did that remnant go? Or maybe this wasn’t caused by two impacts, but by one impact that reshaped the surface in this odd and inexplicable way.

Then there is the three teardrop-shaped patterns in the crater’s floor. They look like the brushstrokes of a giant-sized painter. Were they caused by the wind? And if so, why in this pattern?

Planetary geologists could probably come up with a dozen more questions. The number tells us how little we know about Mars.