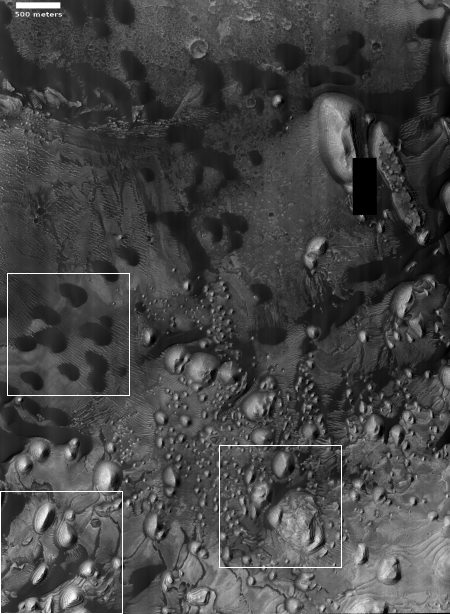 Cool image time! Or I should say a bunch of cool images! The photo on the right, rotated, cropped, reduced, and annotated by me, was taken by the high resolution camera on Mars Reconnaissance Orbiter (MRO) on February 3, 2020. An uncaptioned image, it was entitled “Arabia Terra with Stair-Stepped Hills and Dark Dunes.” Arabia Terra is one of the largest regions of the transition zone on Mars between the northern lowland plains and the southern cratered highlands. It is also where Opportunity landed, and where Europe’s Rosalind Franklin rover will land, in 2022.

This image has so many weird and strange features, I decided to show them all, Below are the three areas indicated by the white boxes, at full resolution. One shows the black dunes, almost certainly made up of sand ground from volcanic ash spewed from a long ago volcanic eruption on Mars. 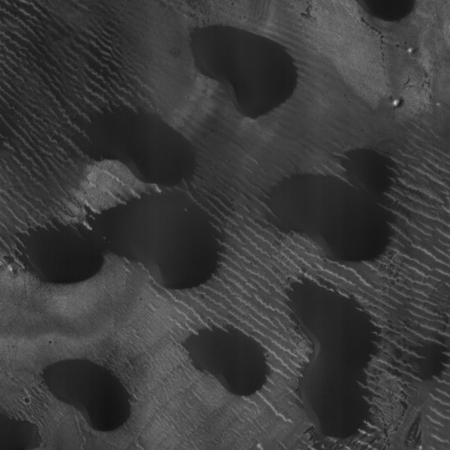 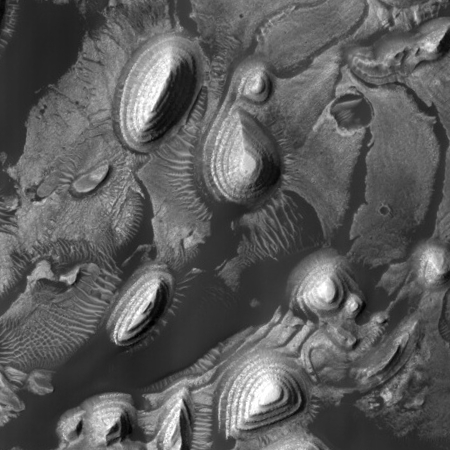 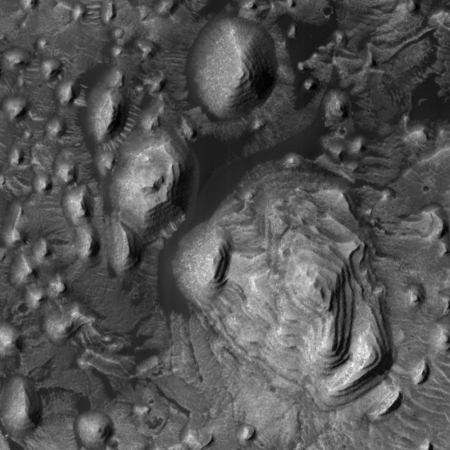 The first image shows a close up of the black dunes. What I find interesting is that these large dunes appear to sit on top of a series of parallel ridges of lighter material. Those ridges could be very old sand dunes themselves, now hardened into a type of sandstone.

Over time the darker sand dunes crept over them, blown as separate clumps traveling as units, the sand on top blown off to fall to the base to be covered by later windblown sand, almost like an eddy in a river.

The two dune features also appear to show a change in prevailing winds. With the newer black dunes the wind blows from the northwest to the southwest. If the lighter older parallel ridges were once dunes, the wind apparently blew in a direction 90 degrees different.

Then again, those lighter ridges might not have been wind-driven dunes. Instead, they have been caused by lapping water at the edge of a shallow sea to the north. In the full image we can see ridges oriented in this manner in several other places, and all appear to be aligned facing the lower flat region at the top of the photograph.

The second and third images to the right show several of the stair-stepped hills seen near the bottom of the photograph. These once again suggest to me the lapping of water at different depths at different times, like we are looking at the dried-out shoreline of an ancient ocean. Once, that ocean surrounded these mesas, and as the sea level changed it caused the terraced erosion.

Later, and for a long time since, wind has further shaped these mesas, which might have once been chaos terrain, but with time were eaten away until only some knobs and terraced hills remain.

Or not. My guess is as good as yours.