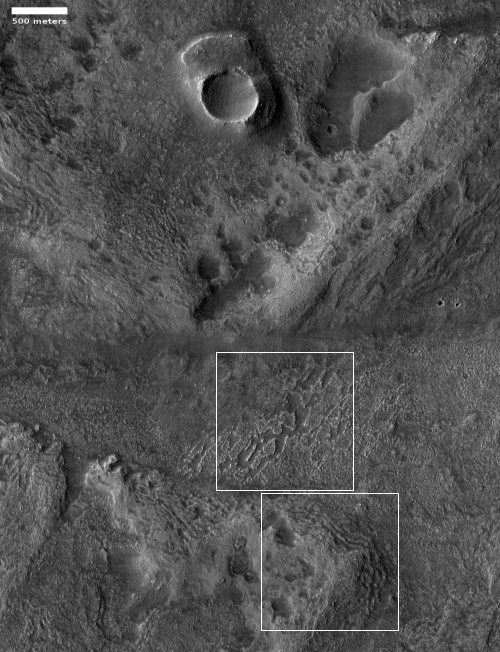 Today’s cool image is another example of strange terrain on Mars that is difficult to explain, though one can make some guesses. The photo to the right, rotated, cropped, and reduced to post here, was taken on May 29, 2020 by the high resolution camera on Mars Reconnaissance Orbiter (MRO), and shows an area in a region dubbed Aonia and located in the southern cratered highlands directly south of Valles Marineris.

This spot is in the high mid-latitudes, 55 degrees south. In the northern lowland plains one would expect to see a lot of evidence of ice, either as debris covered glaciers in craters or flowing off of mesas, or in an underground ice table that is revealed from impacts and other events that caused it to melt temporarily in the past for a brief instant.

No such features are apparent in this image however. In fact, the photo seems to show a very dry place, with the surface almost all hard bedrock that has been eroded to leave behind rough and sharp features. That a significant amount of erosion has occurred here is indicated by the pedestal crater near the image’s top. When its impact took place the topography was higher. Since then the ground around this crater has been worn away, with the mashed material under the impact at a higher density and more resistant to erosion.

If this spot has an ice table or any buried glacial material, it is not obvious, and certainly not revealed by this erosion.

The two square boxes indicate two insets that I have only cropped to show them at full resolution, and are posted below. 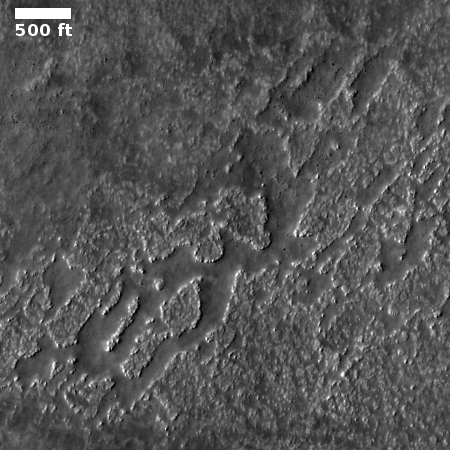 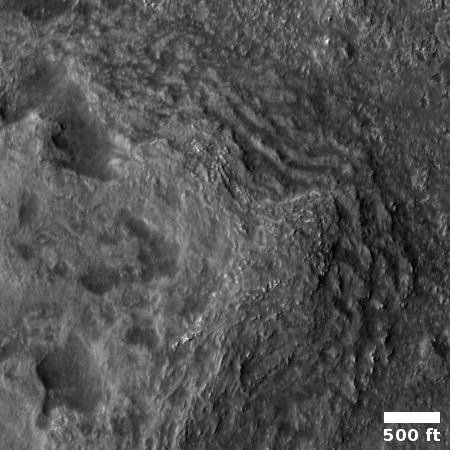 The first inset shows the strangely corroded low point between the crater and the hill to the south. The ground here is interspersed with knobby plateaus and random depressions (most of all are likely filled with trapped dust). It is possible as the surface eroded it revealed a now gone ice table, which as it was exposed immediately sublimated into a gas, causing these haphazard depressions. If you look at the full image you can see similar features everywhere.

Even if ice had been here (a guess that is completely unproven), there does not appear to be any evidence of any leftover ice features now. If this place has buried ice, it appears to remain completely below the surface.

The second inset shows the corroded layered terraces on the north and east slopes of the hill at the bottom of the photo. These terraces are in many ways similar to the knobby plateaus in the first inset, but here they appear to suggest that the terrain here is comprised of layers. Once again, the slope shows no evidence of any flows that would suggest a buried glacial. Instead, the hillside has been eroded away, with the layers being revealed with time.

Normally I would try to contact the scientist who requested this image and was researching this geology in order to get a more educated view. However, this geology is apparently not being researched by anyone. The photo was taken by the high resolution camera imaging team almost at random, taken because they need to use the camera at regular intervals to keep its temperature optimal. When they do this they try to pick spots where few other images have been taken. Sometimes this pays off with some very fascinating geology. Sometimes not. 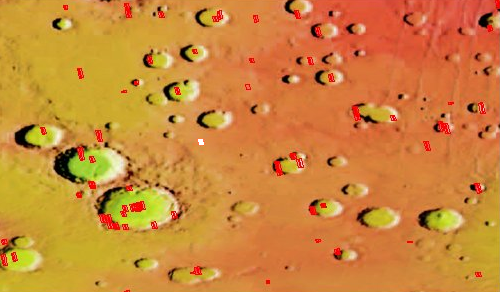 I did a review of all the nearby MRO images (You can do the same if you want, by clicking on the overview and then choosing the arrow in the icon row at the top. Then you can click on each red box, which will show a thumbnail of each image. From there you can access the image itself.)

The photos in the craters do not show glacial features, as you would expect at this latitude. Instead, they show lots of dunes, some of which look like they have been covered with the winter mantle of dry ice which is now sublimating away with the coming of spring (when this image was taken). The photos in the plains between show many strange features, but once again none resemble what we see at this latitude in the northern hemisphere in the northern lowlands. All seem more similar to today’s cool image, a corroded dry surface of bedrock.

For anyone who wants to start a career in planetary geology, this region beckons. There are a lot of mysteries here that need explaining, and I suspect there is also a need for someone new to do the research.