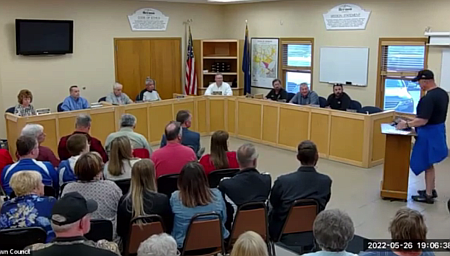 McBreairty speaking in front of the Hermon town council about the
lawsuit against him. Click for video from which this image was captured.

Bring a gun to a knife fight: Shawn McBreairty, a Maine parent who had repeatedly challenged two different local school districts, including his own, for their efforts to teach the queer agenda to little children, yesterday won a $40K settlement from one of those school boards, Regional School Unit #22, after a court judge had ruled that the board’s actions to ban and censor McBreaity clearly violated his first amendment rights.

This is an update of an earlier August 1, 2022 blacklist column. Because McBreairty had tried to read aloud at a board meeting the pornography contained in several books that the school board had approved for its school children, he was silenced, then banned from attending school board meetings, both in person and virtually, for the next eight months.

When the judge ruled entirely in McBreairty’s favor, issuing a temporary injunction against the school board’s actions, the board clearly recognized its case would not hold up in court, and it chose to settle, paying $40K for McBreairty’s legal fees. As the judge noted in her decision:

[I]t is hard to shake the sense that the School Board is restricting the speech because the Board disagrees with both Mr. McBreairty’s opinions and the unpleasantness that accompanies them.

As McBreairty told me on the phone, “Not one red cent of this settlement comes to me. My goal is to defend the first amendment.” Sadly, the settlement money will almost certainly come out of the school’s insurance policy, which in turn means the taxpayer will eventually be on the hook with higher premiums. The school board thugs who tried to silence McBreairty will go unpunished.

Meanwhile, there is the lawsuit by the school district in Hermon, attempting to silence McBreairty. After he had described in detail during a podcast the sexual grooming one Hermon teacher, Mallory Cook, was doing to young children, calling her “a sexual predator,” the district sued, claiming that his statements were “false” and made her “feel unsafe at school.” Its lawsuit demanded he be barred from making any further statements about the teacher, her actions, or the school board’s actions.

He has since filed a motion to dismiss [pdf] that lawsuit. As that motion states:

Hermon School’s proposed remedy to its self-created problem is to violate the Defendant’s right to petition the government and speak freely under the U.S. and Maine constitutions. Moreover, Hermon School admits that their anti-bullying policy does not apply to Mr. McBreairty but asks this Court to invent a cause of action to enforce their policy by applying a prior restraint on speech against Mr. McBreairty. There are few things more offensive to our Constitution than a prior restraint.

McBreairty’s first victory in RSU #22 above will likely strengthen further his case against the Hermon lawsuit. So will the fact that the teacher in question, Mallory Cook, resigned a few weeks ago. If you want to see the kind of work she and others have been doing in Maine schools, just watch this video.

The motion to dismiss also calls for Hermon to pay all of his legal costs and fees. McBreairty is once again asking for no money for himself. Expect the district to soon settle, in his favor.

When it comes to the queer agenda in elementary schools, the law is entirely on the side of the parents objecting. So is morality, at all conceivable levels. No school or teacher has the right to teach sexual matters to elementary school children, without the permission of the parents. Nor has any school or teacher the right to do so secretly. In fact, keeping such discussions a secret proves the action is predatory in nature. Anyone who does such a thing is nothing more than a pedophile. Kudos to McBreairty for fighting this fight. More parents should join him.