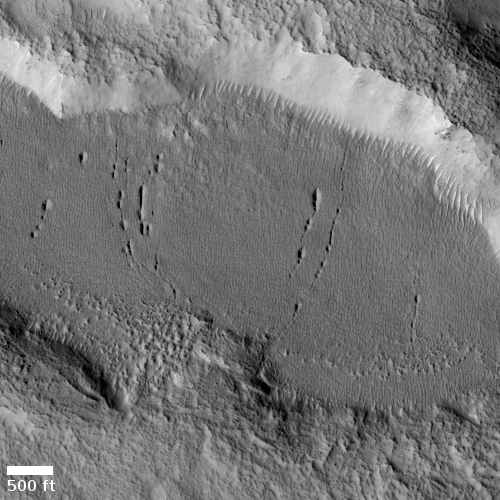 With today’s cool image we return to what I have labeled glacier country on Mars, though this time the image shows a Martian glacial feature that while resembling vaguely such features seen on Earth, has an alienness to it that requires some explanation.

The photo to the right, cropped to post here, was taken on March 24, 2020 by the high resolution camera on Mars Reconnaissance Orbiter (MRO). The section I have focused on is the floor of a depression with a number of parallel pits, more or less aligned with the packed north-south ridges that cover the entire floor.

Normally, the north-south ridges would suggest repeated glacial flows moving to either the west or to the east. Such movement could over time, cause the ridges to separate, creating the cracks or pits that we see here. The trouble is that the slope of this depression is very unclear. In fact, the wider view below shows that this depression appears mostly enclosed, or if not it does not seem to be flowing in any particular direction. 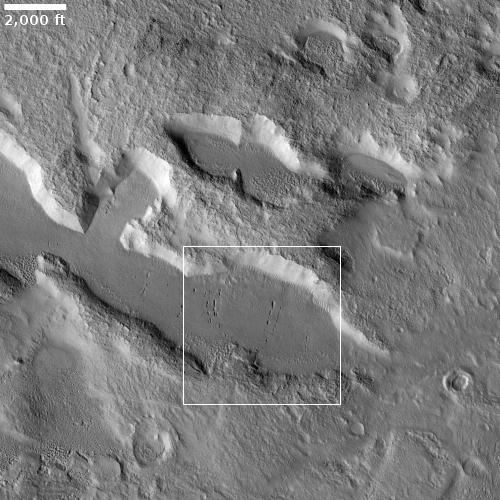 While there is a faint suggestion of a slope down to the west, that is hardly obvious or proven. In fact, the surrounding terrain suggests instead no clear slope at all, with its pits and depressions forming in almost a random pattern. Moreover, the depressions all give the impression that they are filled like ponds with ice. Why then would the ice in these depressions have these repeating north-south ridges, almost like waves?

This region, dubbed Protonilus Mensae, is an area of chaos terrain, random mesas separated by criss-crossing canyons, caused by erosion and typically found in the transition zone between the cratered southern highlands and the northern lowland plains. The image itself is of the floor of one of the wider canyons, just to the northeast of the rim of 85-mile-wide Moreux Crater. 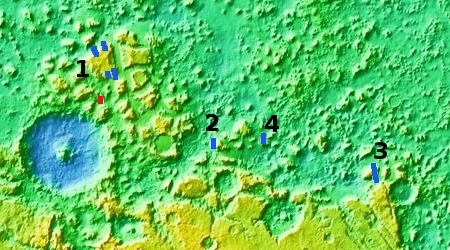 The red rectangle in the overview map to the right shows the location of this image. The numbered blue boxes show glacial features that I have previously highlighted:

If you go to the MRO archive of images from its high resolution camera and go specifically to this location (link here), you will get access to all the high resolution photos so far taken of Protonilus. Click on any red box at this archive and you will see a different MRO image that invokes the same glacial features. If I wanted to, I could post a cool glacier image for practically every single one.

In today’s image, we see that sometimes these Martian glacial features resemble what we’d expect on Earth, but at the same time raise questions that need further exploration.