The fractured floor of Komarov Crater
November 16, 2018 at 10:35 am Robert Zimmerman Points of Information 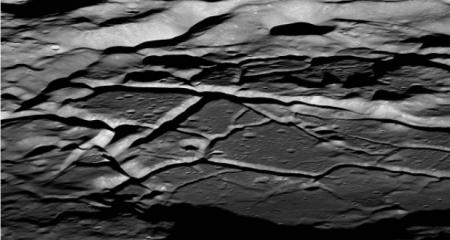 Cool image time! The Lunar Reconnaissance Orbiter (LRO) oblique image on the right, reduced significantly from the original to post here, shows the deeply fractured floor of Komarov Crater on the Moon’s far side. As noted at the image link,

The spectacular fractures that cut across the floor of Komarov crater [about 85 kilometers or 50 miles diameter] were formed when magma rose from the mantle, uplifting and fracturing the crater in the process. In this case the magma did not erupt to the surface, thus the fractures remain visible.

The Komarov fractures are quite large, the major left-to-right fracture that cuts across the center of the scene is over 500 meters deep [1,600 feet] and 2500 meters wide [1.5 miles]. When did they form? The large number of craters superimposed on the floor and fractures testifies to their ancient ages. Likely they are of the same vintage (>2.6 billion years) as the Mare Moscoviense lava plains just to the north

An overview of Komarov Crater as well as other LRO images of it can be found here.

The question that comes to my mind is the relative rarity of craters with such large fractures on their floors. I have noted this for Mars as well. It is expected that there is melt on the floor of all large impact craters. Why do a few produce such pronounced fractures, while most do not? This website posits one explanation, but its complexity leaves me unsatisfied. It also doesn’t explain why it happens only rarely.