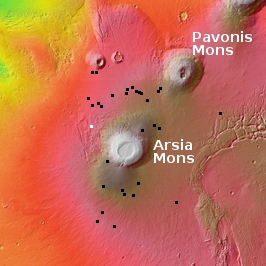 Cool image time! The photo to the right, rotated, cropped, reduced, and annotated to post here, was taken on September 28, 2020 by the high resolution camera on Mars Reconnaissance Orbiter (MRO). Uncaptioned and labeled “Reticulate Bedform Change Detection on Arsia Mons West Flank,” it shows a whole bunch of strange features in addition to a change that occurred sometime in the past two years.

I think it also well illustrates in one image how alien Mars is.

The main features in this photo are what scientists have dubbed reticulate bedforms. These features, found mostly in the high elevations on the flanks of the giant volcanoes in the Tharsis Bulge to the west of Valles Marineris, are thought to be ancient dunes made of volcanic dust and debris that has solidified into an aggregate. These dunes are found with a variety of patterns.

Aggregates on the flanks are transported downslope by katabatic winds and form linear and “accordion” morphologies. Materials within the calderas and other depressions remain trapped and are subjected to multidirectional winds, forming an interlinked “honeycomb” texture. In many places on and near the volcanoes, light-toned, low thermal inertia yardangs and indurated surfaces are present.

The photo to the right appears to show all three patterns, even though it is located on the northwestern slopes of of Arsia Mons, the southernmost of the string of three giant volcanoes in the Tharsis Bulge. On the overview map to the right, this photo’s location is indicated by the white box. The black boxes indicate the location of all the pits caves that surround Arsia Mons which I have previously posted about on Behind the Black.

Either way, this particular cool image has two areas of interest, as noted by the white boxes above. 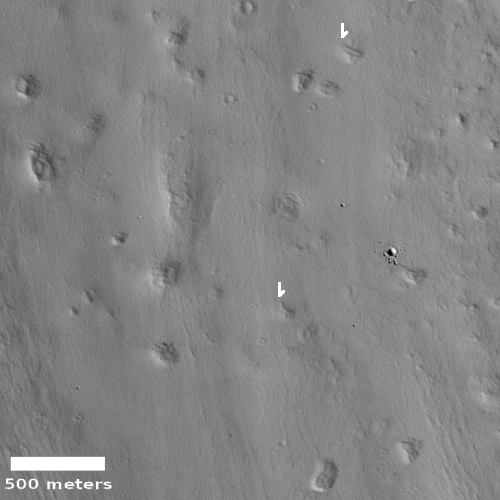 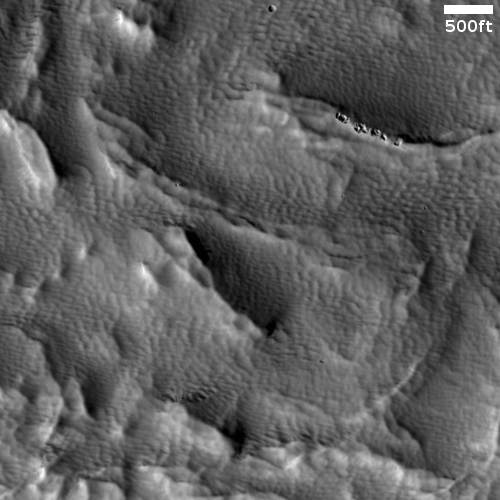 The first, near the top, highlights the detected change that occurred sometime in the past two Earth years. The arrows in the 2020 photo above point to the same two distinct mounds in the 2018 photo to the right. Between these mounts a large dark slope streak has appeared.

As I have previously described, slope streaks are a unique phenomenon of Mars that remain unexplained. Though they look like avalanches, they do nothing to change the topography and show no evidence of material falling downslope. Instead, they appear to be a stain that suddenly moves downward, triggered it appears by some disturbance at the top, such as a rockfall.

The second photo to the right focuses in on the larger reticulate bedforms near the bottom of the first image. Not only do they not appear to follow any pattern, one ridge has some distinct holes at its peak. On Earth such holes could be created in hardened sand when rain hits it. The sand is easily washed away, and can form pits.

There is no rain on Mars. Why this particular ridge has that collection of holes is therefore a mystery.

The bottom line, as noted in one paper, “The processes that form slope streaks remain obscure. No proposed mechanism readily accounts for all of their observed characteristics and peculiarities.”

Mars is strange. Mars is alien. Mars epitomizes the universe in all its glory.

That last line applies to almost everything we see on Mars, not just its slope streaks.