The alien Red Planet and the scientific method 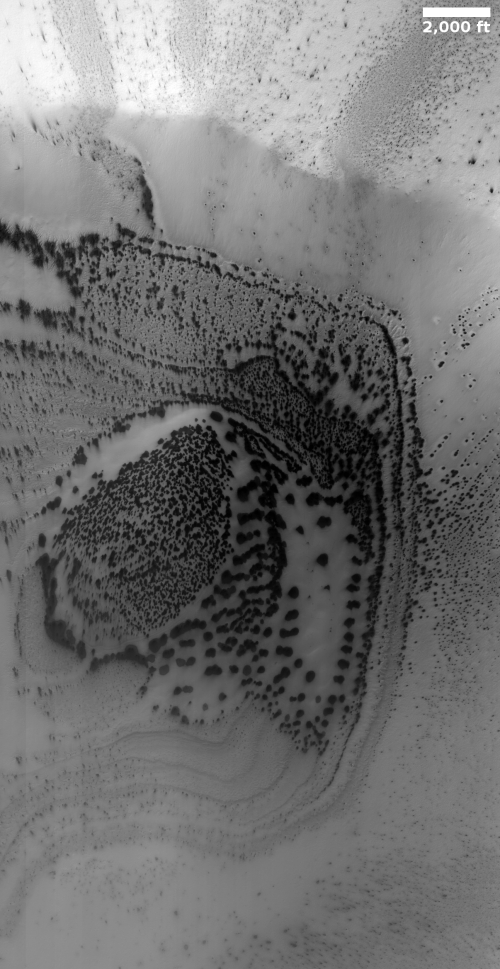 As a child growing up in the 1950s and 1960s and an avid reader of science fiction, I was constantly presented with stories about Mars and what people imagined it was like. At the time no spacecraft had as yet gotten a close look at the planet, so the theories of a desert planet, with many canals built by an alien race attempting to stave off death as the planet’s water disappeared, were still considered possible. So were theories that the changing colors across its surface seen seasonally in ground-based telescopes suggested the possibility of some form of lichen-like life that came and went with the seasons.

None of those fantasies have turned out to be true. All attempted to create an alien planet in the model of Earth, and thus were guaranteed to get it wrong. After a half century of increasingly sophisticated research, we now know a bit more about what Mars is like, and have learned that it is much stranger than we had imagined, an icy world quite possibly shaped by slowly shifting glaciers and ice sheets, creating surface features in ways so alien from what we are familiar with on Earth that even now scientists struggle to figure those processes out.

The photo above and to the right, taken on May 25, 2020 by the high resolution camera on Mars Reconnaissance Orbiter (MRO), is a perfect example. At first glance it fits what I call a “what the heck?” image. Without knowing more, it is impossible to figure out what we see here.

The wider image below, taken by context camera on MRO, provides our first clue. 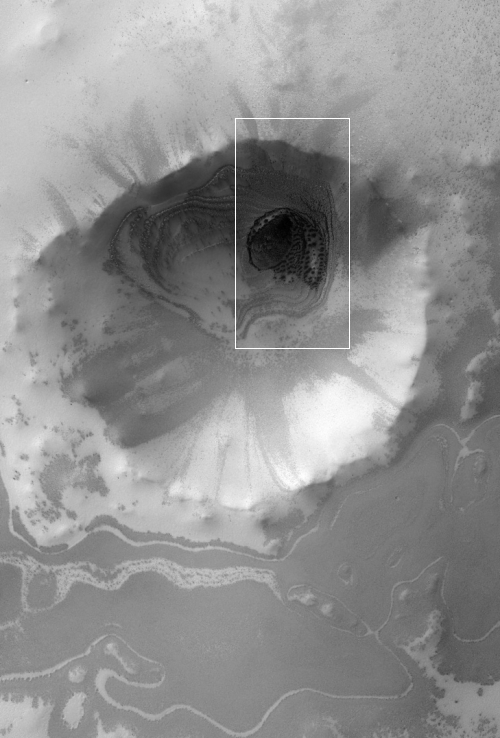 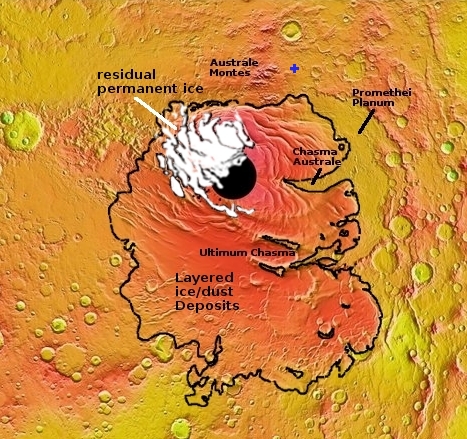 The white box indicates the area covered by the first image. This feature is apparently in the floor of a crater. A look at the surface features south of the crater strongly suggest ice, as do the dark splotches in the crater’s floor, which are features seen in both of Mars’ north and south polar regions with the coming of spring.

In the winter on Mars the carbon dioxide in its atmosphere falls as snow at the poles, laying a mantle of carbon dioxide dry ice on everything down to about 60 degrees latitude. In the spring, when the Sun returns, the ground below that dry ice mantle is warmed, causing the dry ice to turn to gas at its base. Eventually gas pressure causes the mantle to break at its weak points, allowing that CO2 gas to escape while leaving behind a dark splotch.

At the south pole this process tends to occur on bedrock or on firm ground, so it wears away the same paths upward each year, producing what have been informally dubbed “spiders” by scientists. (Earlier this week I posted a wonderful example of these spiders, in this case what looks like a starburst spider.)

The overview map to the right, with this location indicated by the blue cross, strengthens this conclusion. This crater is located in the high southern latitudes (at 79 degrees south latitude) only about seventy miles from the edge of the layered ice/dust deposits that mark the outer limits of the red planet’s southern polar ice cap.

All this information helps explain what we see in the first image above, but only partly. To understand it better and also understand how the surface here evolves with the coming of spring, Candy Hansen of the Planetary Science Institute in Tucson, Arizona, has been requesting high resolution images every two weeks of this crater since the arrival of spring in April 2020. (You can see this year’s previous three images here.) 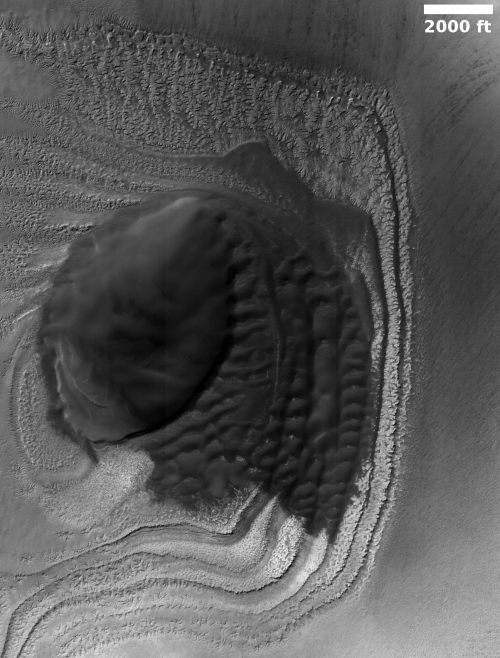 These images are helpful, but I think the image to the right, taken in January 2017, is even more clarifying. Taken in the summer after the dry ice mantle has completely disappeared, there are no splotches, so the dune field at the bottom of the crater is now obvious. Also, if you look closely at the patterned areas surrounding this dune field you can clearly see spiders, now no longer obscured by the splotches.

This photo also makes obvious the mound to the west of the dune field, suggesting to me that it in fact is the source of the dust for the dunes to the east, though Hansen thinks otherwise. “I don’t think the mound is the source of the dunes. I think it’s just more like a sand sheet that doesn’t have well-developed dunes.” Regardless, the sand within this crater is not unusual, as we see dunes inside many Martian craters. The wind deposits it there, where the dust gets trapped, accumulating over time.

In the first image above the dry ice mantle lightens the surface, except where breaks have occurred to produce the splotches. In this last image we see the entire permanent surface, as it looks when there is no dry ice present. The layering just south of the dunes to my eye suggests cyclical glacial activity, though that is an uneducated guess.

Now everything we see in this photo is explained, right? Hardly. As Dr. Hansen explained,

One of the interesting things about this site is that it is not on the polar layered deposits, where most spiders are. We have a citizen science project (paused at the moment because we need to add more images) where volunteers identify spiders in MRO’s context images without any preconceived notions about where they should be. So, this was a location that popped up, which is one of the reasons why it’s interesting. We are now thinking that it is a property of the surface that is more conducive to erosion that allows the spiders to form.

The big mystery however is that scientists have so far not identified any spiders in what appears to be comparable terrain in the northern hemisphere. As Hansen added,

The lack of spiders in the north is indeed a mystery. It could be that the surface just doesn’t erode easily. Or it could be that there are enough differences in the actual winter due to Mars’ elliptical orbit that the seasonal activity plays out differently. We have enough data for several PhD dissertations on these topics.

The image poses other mysteries. Though I can guess that the layering is from cyclical glacial activity, that hypothesis does not really explain all of what we see here. For example, the spiders are mostly found on the top of these alternating layers. If the layers were cyclical glacial activity than the spiders are forming on the debris that covers those glacial layers, a fact that seems baffling. Why do the spiders form here on that debris, and not elsewhere? And why on every debris layer?

Furthermore, we don’t really know how much ice there really is at this location, or even if the icelike features south of the crater are even ice. The ice table could be thick or thin, deep or shallow, or not even there. More data is required.

Mysteries all, but that’s why science is exciting. It demands that we do not fall in love with our theories, but to question them always as we dig repeatedly into the real data to find the truth. The minute the data contradicts our theories those theories must be abandoned.

Mars, since astronomers made their first observations by telescope four hundred years ago, has been a perfect example of this reality. The red planet has constantly fooled us, making our theories look ridiculous over and over again, once we obtained new data.

Sadly, too many so-called scientists in the health and climate fields today fail to follow this basic premise of science. Instead, they let their theories rule, and try to force the facts to fit the theory. Models say COVID-19 will kill millions! The disease must be deadly, even though the data now shows that it is simply not life threatening, at all, on its own.

Furthermore, our climate models say the Earth is warming, due to carbon dioxide! Who cares the warming seems to have ceased these past twenty years, and that the data is incomplete and the climate system is so complex that we really don’t understand it fully. Our models tell us what will happen, and no matter what, we have to make the reality, even if it requires to tamper with the data!

The result isn’t more knowledge, but the distortion of reality, and an inability to see truth, even if it is staring us in the face.

More scientists should take a look at Mars and its history. It will teach them to once again be humble, and to relearn the scientific method. They, as well as all of us, would then benefit greatly.