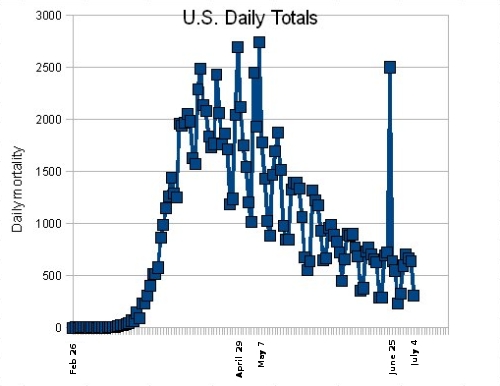 But we’re all supposed to die! According to the Centers for Disease Control (CDC), the number of deaths from the Wuhan virus had declined so much that the agency is on the verge of calling the epidemic over.

The CDC qualifies a disease outbreak as an “epidemic” if the number of deaths attributable to the disease exceeds a certain percentage of total deaths per week. That threshold for pneumonia, influenza and COVID-19 fluctuates slightly depending on the time of year, ranging from around 7% at the height of flu season to around 5% during less virulent months.

…The latest data show that the percentage of deaths in the country attributable to those factors had as of the last week in June reached its lowest point since the end of last year, becoming “equal to the [current] epidemic threshold of 5.9%,” the CDC said.

The numbers will change as more death certificates are processed, with I expect some health agencies in some states continuing their effort to fudge the numbers to pump up the COVID-19 totals. Regardless, the graph above (source here.) clearly shows that the epidemic is declining, with daily deaths dropping steadily since early May. (The two spikes of deaths on May 7 and June 25 are because New York and New Jersey suddenly added a whole slew of new deaths, under suspicious circumstances.) 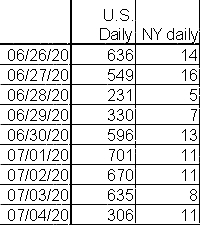 The graph shows a very slight increase in the past week, which could be attributed to the uptick in new cases, but if so the increase is tiny, and is close to statistically insignificant. The table to the right shows the actual numbers of deaths per day nationwide since that June 25 New Jersey spike, with the daily New York numbers thrown in as well. Not only is it hard to measure any significant uptick, the numbers in New York have been so low in the past nine days it has become absurd that the Democratically-controlled local governments there continue to insist on maintaining their draconian lock downs and mask requirements.

That the press is now focusing on the increase in cases, when the death toll has been subsiding so steadily, demonstrates their corruption and inability or refusal to do their job properly, If anything, it labels them as fear-mongers screaming fire in a theater (which is not on fire) who should be ostracized from society.