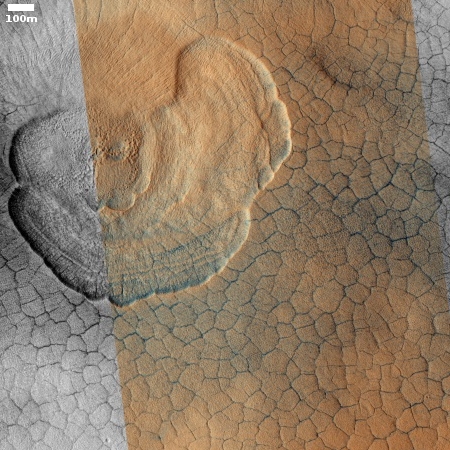 Cool image time! The photograph on the right, cropped to post here, was taken on September 25, 2019 by the high resolution camera on Mars Reconnaissance Orbiter (MRO) and made public in its November image release. It shows the weird but very typical scalloped terrain, with its adjacent polygon pattern of fractures, found routinely in the northern lowland plains of Utopia Planitia on Mars. From an earlier captioned image from 2006 of these same features:

The scalloped depressions are typical features; a smooth layered terrain located between 40 and 60 degrees in both hemispheres. Scalloped depressions probably form by removal of ice-rich subsurface material by sublimation (ice transforming directly from a solid to a gaseous state), a process that may still be active today. Isolated scalloped depressions generally have a steep pole-facing scarp and a gentler equator-facing slope. This asymmetry is interpreted as being the result of difference in solar heating. Scalloped depressions may coalesce, leading to the formation of large areas of pitted terrain.

The polygonal pattern of fractures resembles permafrost polygons that form in terrestrial polar and high alpine regions by seasonal-to-annual contraction of the permafrost (permanently frozen ground). On Earth, such polygons indicate the presence of ground ice.

On Earth these polygons are most often seen in mud, usually suggesting a drying process where the ground contracts with the lose of fluid. On Mars the cracks probably also form from contraction, but not by the lose of fluid but the lose of water ice as it sublimates into a gas. 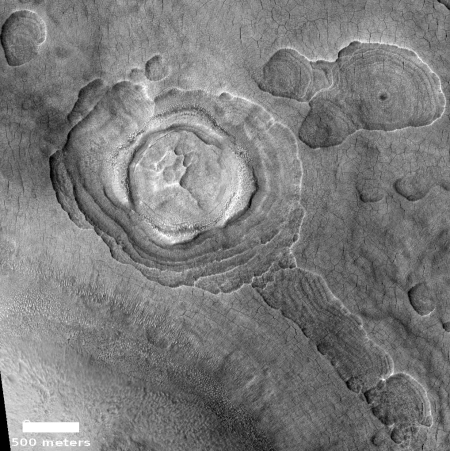 For example, only a few miles to the east of the first image above are even stranger scallops, shown on the right, reduced and cropped to post here. This earlier MRO image from 2014 includes a lot of depressions that cannot be explained by impact, though the circular feature in the image to the right could be the remains of a very ancient crater. If you click for the full image you will see that, except for the higher mounds, almost all of the flat terrain is covered with polygons.

Nor are these two images unique. See for example this captioned image from 2007, also located in Utopia Planitia but farther to the north. Once again the flat ground is covered with fractures, interspersed with strangely shaped terraced depressions.

The polygons here make this region, for me, a less palatable location for human settlement, at least initially. They suggest that a good percentage of the subsurface ice here has gone away, making this more like a desert than other places on the northern plains, such Arcadia Planitia, which SpaceX is considering as a potential Starship landing site. There the images show no polygons, which means the ground stands a better chance of still being ice saturated.