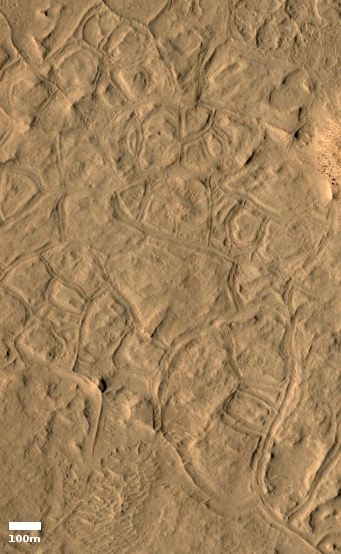 Today’s cool image, rotated, cropped, and contrast-enhanced to post here, focuses on polygons found near the equator of Mars. It was taken by the high resolution camera on Mars Reconnaissance Orbiter (MRO) on May 22, 2020, and shows what the science team labels as “well-preserved polygons.”

Previously I have posted cool images showing polygons (here and here), but those images were located in the northern mid-latitudes, and were thought to have been formed in connection with some form of freeze-melt-drying water process in permafrost.

Today’s image however is likely not related to water. It is located in the equatorial regions, where little water is expected. It also has a more permanent nature, which suggests that it is the result of some sort of volcanic or tectonic process. That the polygons are depressions suggests the latter, since a volcanic process is more likely to have filled cracks and left ridges more resistant to erosion, as explained by this article.

In this case the topography suggests instead some form of spreading and cracking process that left behind these polygon-shaped cracks. In mud, such polygons are found when the mud dries, but once again, these are in a very dry region. If formed in that manner they must have formed a very very long time ago, when the climate here was very different, and were somehow preserved for eons since.

The location, as shown in the overview map below provides some context, though it really doesn’t answer any questions..

The white cross indicates the location of the polygons, just inside the middle region of the Medusae Fossae Formation, the largest volcanic ash deposit on Mars.

This location suggests a volcanic origin, as it is also in the midst of Mars’ volcano country. Maybe the cracks had existed previously, and were then partly filled by lava.

The location, at the upper edge of the transition zone between the lower northern lowland plains (in blue and very far away) and the southern cratered highlands (in yellow/orange and very close by), adds weight to an ancient water-related process. There are a lot of meandering canyons flowing down from those cratered highlands just to the south.

Who knows? I don’t. However, if you want to help scientists find more of these polygons on Mars, which in turn might help them explain the various processes that formed them, you can. The article on polygons linked to above describes a citizen-scientist project that allows ordinary people to look and identify polygons for these scientists.