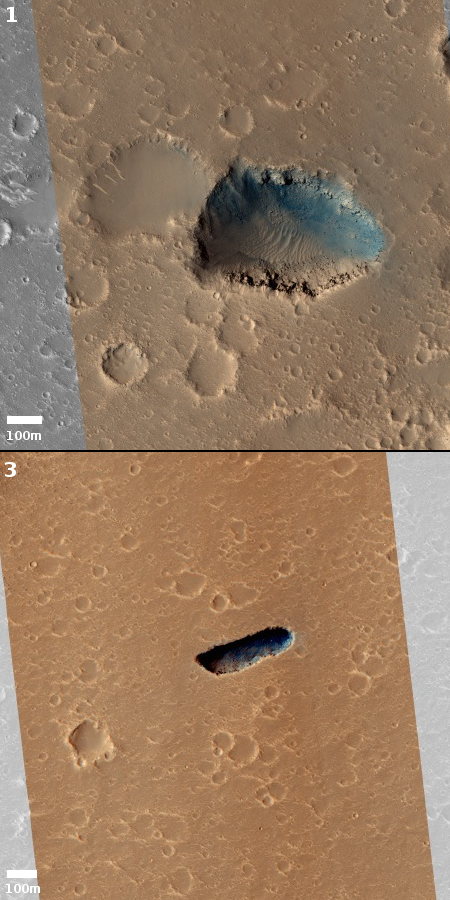 I could call this my monthly Martian Pit update. Since November 2018 I have each month found from two to five new and interesting cave pits in the monthly download of new images from the high resolution camera on Mars Reconnaissance Orbiter (MRO). My previous posts:

All except the last August 12 post were for pits on the flanks of Arsia Mons, the southernmost in the line of three giant volcanoes to the southeast of Olympus Mons, and were thus almost certainly resulting from lava flows.

The August 12 post instead showed pits found in Utopia Planitia, one of the large plains that comprise the Martian northern lowlands where scientists think an intermittent ocean might have once existed. All of these pits are found in a region of meandering canyons dubbed Hephaestus Fossae.

In the most recent MRO release scientists once again focused on the pits in or near Hephaetus, imaging four pits, two of which have been imaged previously, as shown in my August post and labeled #2 and #4 in this article, and two (here and here) that appear new. The image on the right, cropped to post here, shows the two new pits, dubbed #1 and #3. In the full image of #1, it is clear that this pit lines up nicely with some other less prominent depressions, suggesting an underground cave. Pit #3 however is more puzzling. In the full image, this pit actually runs perpendicular to a long depression to the west. There are also no other related features around it.

What makes all four of these pits intriguing is their relationship to Hephaestus Fossae and a neighboring rill-like canyon dubbed Hebrus Valles, as shown in the overview map below.
END_OF_DOCUMENT_TOKEN_TO_BE_REPLACED