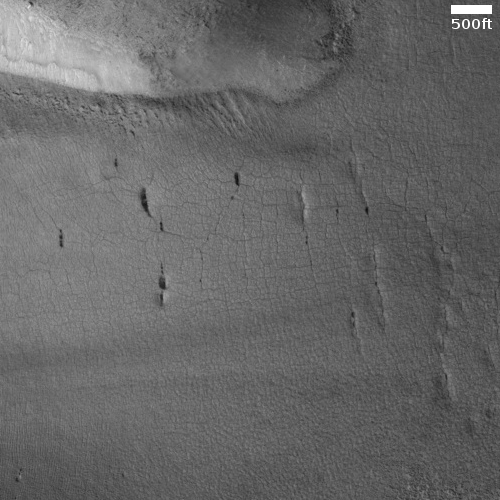 Cool image time! The photo to the right, cropped to post here, was taken on December 4, 2020 by the high resolution camera on Mars Reconnaissance Orbiter (MRO)

I have cropped it to show at full resolution the area that contains what the scientists apparently consider the most interesting feature in this image, which they have labeled as “pits forming lines.” These are the vertical cracks and strings of holes that can be seen in this glacier-like flow. In addition, you can see that the cracking is not just vertical, but also extends out in horizontal directions, though the widest cracks are all vertical.

The next image below, which is a lower resolution crop of the full photo, shows a wider view to provide a better picture of the glacier itself. 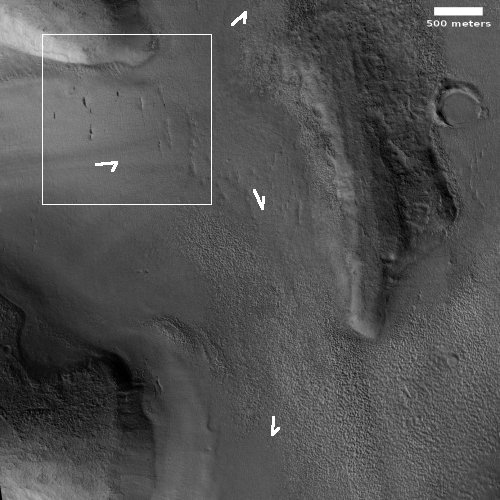 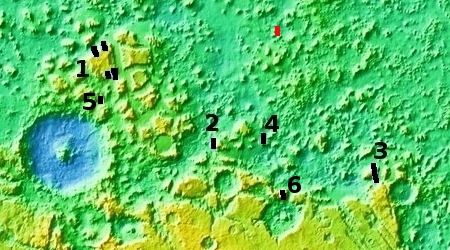 The white box marks the area covered by the first photo above. The white arrows indicate my guess of the downhill flow direction of this apparent glacier, which seems to split at the eastern mesa into northeastern and southern flows.

The red box in the overview map below marks the location of this glacier, in the northern part of the chaos region dubbed Protonilus Mensae that is also part if what I have dubbed Mars’ mensae glacier country.

The numbered black boxes indicate cool images in this region that I have previously featured:

So, why the cracks? My guess is that at some time when this glacier was flowing (which is probably not now), the flow rate in this section was faster than the deposition rate of ice, so the glacier started to spread, producing the cracks. The vertical cracks, perpendicular to the flow, were pulled apart, and thus produced the holes. The horizontal cracks, parallel to the flow, were merely elongated which is why they are not as wide.

It is also possible that this ice might less protected by dust and debris, so that it is now sublimating away, thus causing these holes and cracks to widen with time.

The photo illustrates again why I call this Mars’ glacier country. Every photo of every mesa you see in the overview map has similar glacier-like features. There is a lot of buried ice in this region on Mars, all there for future explorers to mine to their heart’s content.