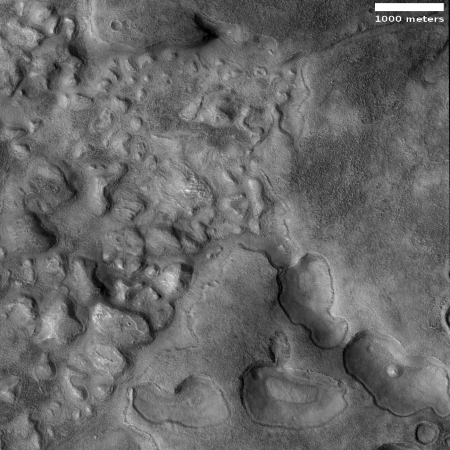 Although there are impact craters in this area, some of the features … are too irregular to be relic impact craters or river channels. One possibility is that sedimentary layers have been warped from below to create these patterns. The freezing and thawing of subsurface ice is a mechanism that could have caused this.

The image to the right, rotated, cropped, and reduced to post here, shows the lower quarter of the full image. While in some areas it does appear as if changes below the surface caused the surface to warp and collapse, as suggested by the caption, in other places it looks more like the top layers themselves sublimated away without disturbing what was below them.

Note for example the pits near the bottom of the photograph. They clearly show sedimentary layers on their cliff walls, including the tiny circular mesa in the middle of the rightmost pit.

If these pits were collapsing from below, their cliffs would be more disturbed, because it would have been those lower layers that sublimated first. Instead, it appears that the top layer disappeared first, followed by each lower layer, one by one.

This region of strange terrain is located in the middle of the northern lowland plains. The overview map below gives some context, with the small white box showing this photo’s location. 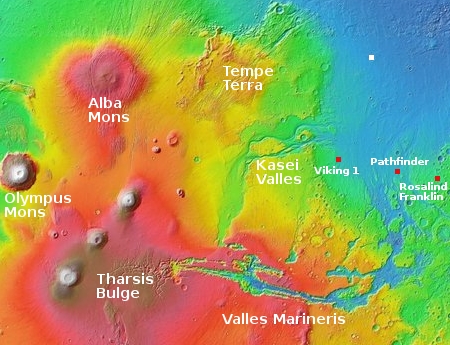 At about 44 degrees latitude, this feature is on the edge of a low rise in those lowlands, about twenty miles wide, where similar features were seen in an earlier MRO high resolution image.

For scale, note that you could put between two and three North American continents on top of this map, and still have spare room. The distance from this feature to the closest point at the edge of the blue-colored northern lowlands is about equal to the distance from New York to St. Louis. There is a lot of territory here, much of it still not looked at by any high resolution camera.

At this latitude scientists have found a great deal of evidence of ice, either as buried glaciers or an underground ice table. In some places in the northern lowlands, such as SpaceX’s favored primary landing site for Starship, that ice is so close to the surface one scientist has said that “I think you could dig anywhere to get your water ice.”

At this place it looks as if water ice probably played a part in shaping this terrain. How it did so however remains unclear. While it is possible to make some reasonable guesses, we do not have enough data to make any firm ones, yet.