Democratic voters swamp CSPAN to say they are switching to Trump
August 28, 2020 9:19 am Robert Zimmerman 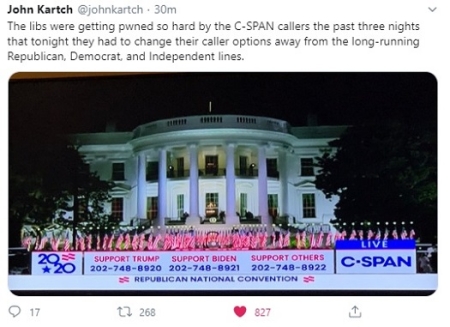 Is this a sign of hope? So many callers on CSPAN’s Democratic Party call line were calling to announce they were either switching to Trump or becoming Republicans after watching the two conventions these past two weeks that CSPAN changed the call lines from “Democrat” and “Republican” to “Support Biden” and “Support Trump.”

I always like to say “It’s the audience that counts.” In this case the audience appears to be making its preference loud and clear, which is to me is truly a sign of hope. Conservatives and supporters of liberty and the rule of law might cheer the speeches and presentations at the Republican convention, but it is how the unaffiliated general public reacts that matters. And at least from this one data point, it appears they are trending to the Republicans.

UPDATE: I stupidly listed the channel incorrectly as CNN in my initial post. This is now corrected.

A new libel lawsuit has been filed by Covington student Nick Sandmann, this time against former CNN host Reza Aslan.

The suit, demanding $135,000 in damages, is for a tweet Aslan sent out showing Sandmann with the comment, “Have you ever seen a more punchable face than this kid’s?” Moreover,

According to PJ Media the suit names a variety of public figures including “Ana Navarro, Sen. Elizabeth Warren (D-Mass.), Maggie Haberman, and Kathy Griffin.” PJ Media also reports that “According to the lawsuit, the tweet calling Sandmann’s face ‘punchable’ further spread the false narrative that the Covington Catholic boys had aggressively insulted the Native American man, when that was not the case.”

The more the merrier. These leftist mainstream news reporters and politicians have been very willing to spread lies and slanders, and when caught have refused to do anything to fix the problem. The solution then is to bankrupt them in the courts.

No details yet, but CNN has apparently negotiated a settlement with the lawyers for Covington high schooler Nick Sandmann for its slander of him during its reporting.

The amount of the settlement was not made public during a hearing at the federal courthouse in Covington, Kentucky.

Sandmann’s attorney, Lin Wood, said, “This case will be tried not one minute earlier or later than when it is ready.”

The money quote from the article however is this: “Attorneys say the money they’re seeking is not designed to compensate Nick, but to ‘deter the defendants’ from doing the same thing (that they’re accused of) in the future.”

I truly hope the settlement is made public, and it bites hard into CNN’s bottom line. They richly deserve it for their very bad reporting on many things during these past three years. Ditto for the Washtington Post and NBC.

A federal judge has reinstated the $250 million lawsuit by Covington teenager Nicolas Sandmann against the Washington Post for slandering him during its news coverage.

U.S. District Judge William Bertelsman agreed to permit discovery on three of 33 allegedly libelous statements in The Post’s coverage of the Jan. 18 incident pertaining to teenager Nicholas Sandmann. The Post has insisted that its reporting was fair and accurate.

All three flagged statements from the newspaper’s coverage refer to Omaha Nation elder Nathan Phillips being blocked or impeded by Nicholas, a student at Covington Catholic High School, during their viral encounter at the Lincoln Memorial stairs.

Since the video of the event quite clearly shows that Sandmann never blocked anyone, that if anything Nathan Phillips pursued Sandmann, the Post is now very vulnerable to losing the suit. This decision also suggests that Sandmann’s lawsuits against CNN and NBC will also go forward.

Words fail me: In an interview of former FBI head James Comey, CNN’s Christiane Amanpour actually had to have the first amendment explained to her by Comey after she suggested that the FBI should act to censor speech it considers “hate speech.”.

“Of course, ‘lock her up’ was a feature of the 2016 Trump campaign,” Amanpour said. “Do you in retrospect wish that people like yourself, the FBI, I mean, the people in charge of law and order, had shut down that language — that it was dangerous potentially, that it could’ve created violence, that it’s kind of hate speech. Should that have been allowed?”

Comey explained the First Amendment to Amanpour, replying, “That’s not the role for government to play. The beauty of this country is people can say what they want, even if it’s misleading and it’s demagoguery.” [emphasis mine]

I am no fan of Comey, as I think he was a willing participant in the effort at the FBI to illegally overturn the 2016 election of Trump. However, he at least has a basic understanding of the Constitution, the fundamental law of the land. For a reporter at a national cable network to not understand this is horrifying.

The video of Amanpour’s comments is posted below the fold. The clip begins with Amanpour giving Comey a platform to condemn any possible investigation into the FBI’s abuse of power. Not surprising, as he and others remain very vulnerable in this matter.

Amanpour then wonders why that the FBI didn’t shut down free speech she and Comey didn’t like. Also not surprising, coming from an employee of a network whose sole purpose these past two years has been to overthrow the legal election of Trump, in league with that corrupt FBI.

And CNN wonders why Trump calls them “fake news”.
END_OF_DOCUMENT_TOKEN_TO_BE_REPLACED

The law firm for Nicholas Sandmann, the Kentucky teenager who was slandered by numerous leftist mainstream news organizations in January, has now filed a $275 million defamation lawsuit against CNN.

You can read or download the full suit here [pdf]

This suit is on top of a $250 million lawsuit the firm has also filed against the Washington Post.

Right now it appears to me that both the Washington Post and CNN are going to lose big in these suits. Following the filing of the lawsuit against it the Post published “an editor’s note” concerning its coverage of the incident, but never admitted to or apologized for its false reporting. Instead, it merely noted the numerous errors and false claims in the original reporting. If anything, that correction makes it more liable, as it suggests the false coverage was acceptable to it, at the time.

The network is reportedly looking for a seasoned author of thrilling fiction novels to fabricate news stories for its online and televised news coverage.

“Must have a penchant for weaving complex narratives and fabricating intricate storylines out of thin air for the sake of ratings. Experience in Cold War-era spy novels preferred, in the style of Tom Clancy, etc.,” the listing states. “Author will be responsible for making stuff up out of the blue to form the basis of 5-6 news stories per day. Full salary & benefits.”

The listing also states that “no journalism background is required.”

It seems to me that this listing is the most honest I’ve ever seen. Though I’m not sure what difference it makes whether any applicants have a modern “journalism background” or not. Considering what they teach students about journalism in today’s modern colleges, there really isn’t much difference between journalism and fiction anyway.