From masks to the origins of COVID, Anthony Fauci is a liar and a fraud
June 2, 2021 12:36 pm Robert Zimmerman 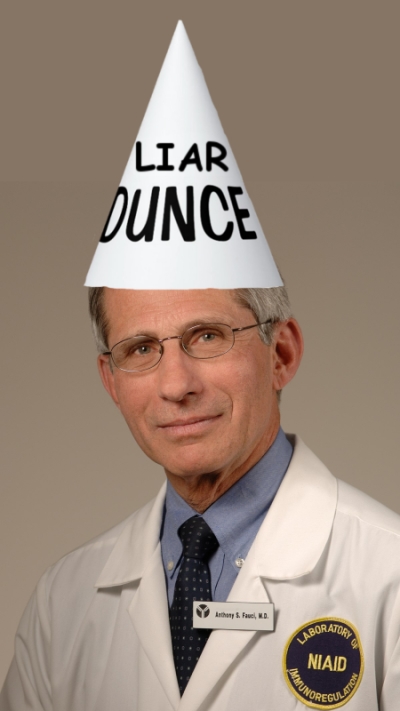 In the past few days a slew of 2020 emails by Dr. Anthony Fauci have revealed his dishonest, incompetent, corrupt, and political agenda during the entire COVID-19 epidemic.

The emails have revealed he lied about his connections with the Chinese Wuhan lab. They reveal that he knew all along that the virus was almost certainly leaked from that lab. They also reveal that he immediately worked to prevent these facts from being revealed publicly, lying if necessary to do it and successfully forcing publications to withdraw news stories based on his lies.

Of all these revelations, however, the one email that best illustrates Fauci’s dishonesty and venality was the one in February 2020 — before the epidemic had taken hold and before any shutdowns had been imposed — where he bluntly admitted what has been known for more than a century, that the general widespread use of masks by people who are not sick is pointless and will accomplish nothing.

Masks are really for infected people to prevent them from spreading infection to people who are not infected rather than protecting uninfected people from acquiring infection. The typical mask you buy in the drug store is not really effective in keeping out virus, which is small enough to pass through the material. It might, however, provide some slight benefit in keep out gross droplets if someone coughs or sneezes on you. I do not recommend that you wear a mask, particularly since you are going to a vey low risk location. Your instincts are correct, money is best spent on medical countermeasures such as diagnostics and vaccines. [emphasis mine]

Less than two months later, Fauci had completely changed his tune, claiming that Americans needed to wear masks all the time. END_OF_DOCUMENT_TOKEN_TO_BE_REPLACED

Fauci admits to lying in his public statements about COVID-19
December 28, 2020 9:39 am Robert Zimmerman

Our corrupt and dishonest government experts: Dr. Anthony Fauci, director of the National Institute of Allergy and Infectious Diseases (NIAID) since 1984, has now admitted that he changed his estimates of the required level of herd immunity needed to stop the epidemic based not on any science but on poll numbers and on “his gut feelings.”

In a Christmas Eve interview with the New York Times, Fauci acknowledged he had offered a lower estimate of the level of herd immunity necessary to stop the COVID-19 pandemic because he thought Americans would be discouraged by hearing his true thoughts on the issue.

He recently raised his estimate on the herd immunity threshold “partly based on new science,” the newspaper reported, “and partly on his gut feeling that the country is finally ready to hear what he really thinks.”

Fauci himself told the paper that he had withheld the higher estimates because polling results made him think such estimates would be viewed unfavorably. “When polls said only about half of all Americans would take a vaccine, I was saying herd immunity would take 70 to 75 percent,” he told reporter Donald McNeil. “Then, when newer surveys said 60 percent or more would take it, I thought, ‘I can nudge this up a bit,’ so I went to 80, 85.”

Fauci admitted that scientists “really don’t know what the real number is,” though he himself estimated that the “real range is somewhere between 70 to 90 percent.”

“But, I’m not going to say 90 percent,” he added, because “doing so might be discouraging to Americans,” according to the Times. [emphasis min]

The highlighted words tell us everything we really need to know about this fraud. He is not only a liar, he is an ignorant liar who cloaks that ignorance by loud declarations based not on knowledge but his own political goals.

Why are we still listening to this idiot? More important, why does he still have a job? Such dishonesty and two-timing should have gotten him fired instantly.

That he is still employed in such a powerful post and is still relied on by others in the media and government for guidance tells us much about the corruption and dishonesty of both those institutions. They support his lying, because it has also served their corrupt political purposes.