For today’s cool image, we are going to start from afar and zoom in, because I think that might be the best way to gain at least a rudimentary understanding of the strange geology visible at this one particular Martian location.

The first image, to the right, is the overview map. The red cross indicates our target, a chaotic canyon that flows into the larger Kasai Valles, one of Mars’ largest and longest canyons and possibly only exceeded in size by Valles Marineris. This part of Kasai is near its end, where it drains out into the vast northern lowland plains of Mars.

The second image, below, comes from the wide angle camera on Mars Reconnaissance Orbiter (MRO).
END_OF_DOCUMENT_TOKEN_TO_BE_REPLACED 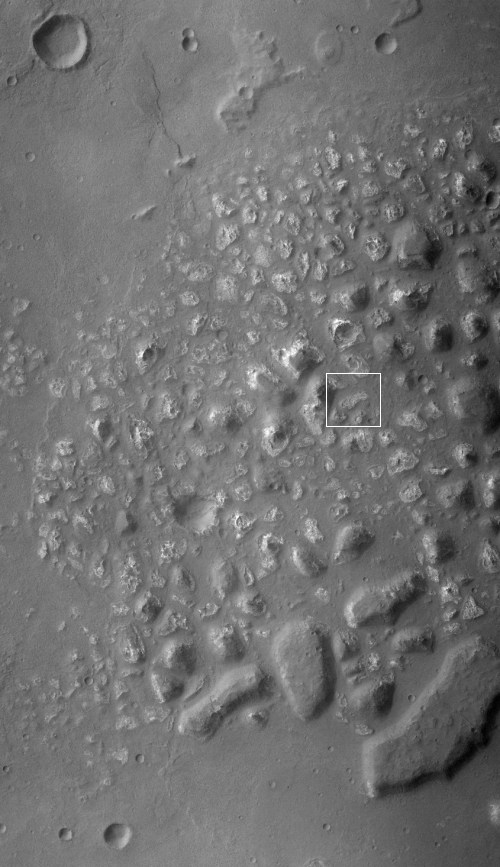 This can be clearly seen by the close-up below, taken by MRO’s high resolution camera on July 16, 2002 of the area indicated by the white box, which for scale is about 2 1/4 miles square.
END_OF_DOCUMENT_TOKEN_TO_BE_REPLACED 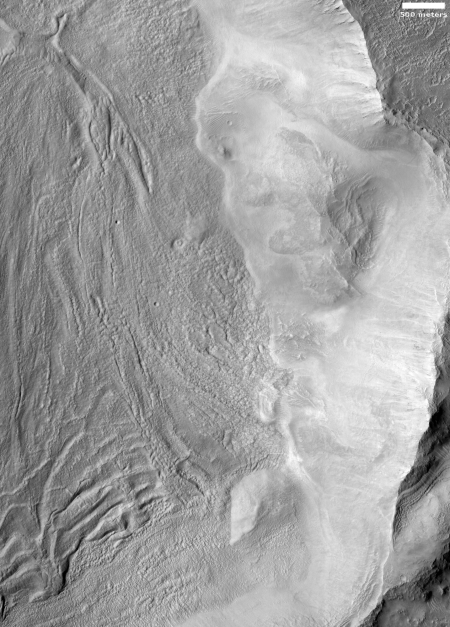 Cool image time! The photograph on the right, rotated, cropped, and reduced to post here, was taken by the high resolution camera on Mars Reconnaissance Orbiter (MRO) on December 21, 2019. It shows the eastern half of the floor and interior rim of a large squarish-shaped crater or depression in what seems to be an unnamed region of chaos terrain located in the transition zone between the Martian southern highlands and the northern lowland plains.

The floor of this depression has many of the features that indicate the presence of a buried ice glacier, including flow features on the depression floor, linear parallel grooves, and repeating moraine features at the slope base. In fact, all these features give the strong impression that this crater is ice-filled, to an unknown depth.

Chaos terrain, a jumble of mesas cut by straight canyons, are generally found in this transition zone, and could be an erosion feature produced by the intermittent ocean that some believe once existed in the northern lowlands. Whether or not an ocean lapped against these mesas and created them, this chaos terrain is believed to have been caused by some form of erosion, either wind, water, or ice. 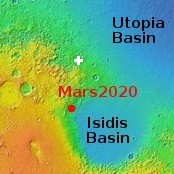 The location is of this chaos terrain in that transition zone is illustrated by the context map to the right. It sits on the edge of the vast Utopia Basin, one of the largest and deepest northern lowland plains. It also sits several hundred miles due north of the planned landing site of the Mars2020 rover in Jezero Crater. There is a lot of chaos terrain in this region, with lots of evidence of buried glaciers flowing off the sides of mesas.

Today’s image, with its numerous features suggesting the presence of a buried glacier filling the depression, reinforces this evidence. 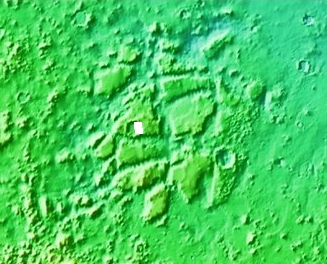 What impresses me most about this particular depression — should it be ice-filled — is its size. I estimate from the scale of the image that the depression is about six miles across, somewhat comparable though slightly smaller than the width of the Grand Canyon. And yet, unlike the Canyon it appears to have a wide flat floor across its entire width. The second context map to the right zooms in on this chaos region to show how relatively large the depression is. It would not be hard to spot it from orbit. We don’t know the depth, but even if relatively shallow this depression still holds a heck of a lot of water ice.

While the depression appears like a crater in lower resolution wider photographs, higher resolution images suggest it is not round but squarish. Why is not clear, and unfortunately MRO’s high resolution camera has taken no other images of it. This image was also one of their terrain sample photographs, taken not because of any specific research request, but because they need to use the camera regularly to maintain its temperature. This location, having few previous images, fit this schedule and made sense photographing.

Thus, no one appears to be specifically studying this location, making it a ripe subject for some postdoc student who wants to put their name on some Martian geology. 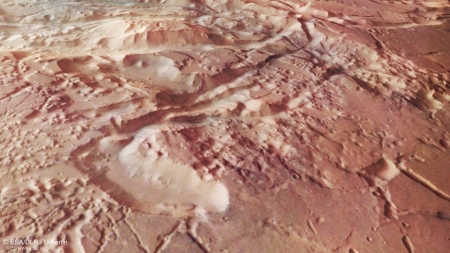 The Mars Express science team today released a digital perspective view of the chaos terrain located in the outlet region for the vast drainages, which include Marineris Valles, coming down from the Tharsis Bulge volcanic region that holds Mars’ largest volcanos.

The division between the chaotic terrain and plains can also be seen clearly in these images. The left (south) side of the image is notably smoother and more featureless than the jumbled right (north) side, and the two regions are split by a prominent line carving diagonally across the frame. The transition area around this scarp is especially broken and fractured; this is thought to be caused as the martian crust stretched and moved.

…
The ancient chaotic terrain we see on Mars holds information about how water once permeated and interacted with the planetary surface, including how it was transported, stored, and released.

Chaotic terrain is thought to have formed as chunks of the martian surface collapsed in dramatic events triggered by the heating of material containing ice or water-bearing minerals – possibly due to climatic or volcanic heat sources, or an impact from an asteroid or comet. This released large amounts of water, causing the terrain above to subside. The water then drained away quickly, leaving behind the messy, broken patterns seen in regions such as Aurorae Chaos, which is thought to have formed some 3.5 billion years ago.

Mars Express images don’t quite have the resolution of the high resolution images from Mars Reconnaissance Orbiter, but they cover a wider area, so that the spacecraft has now photographed almost the entire Martian surface since its arrival in Mars orbit in December 2003.

Cool image time! In perusing the April image release from the high resolution camera of Mars Reconnaissance Orbiter (MRO), I came across the image above, cropped and reduced to post here, of the discovery of another landslide within Hydraotes Chaos, one of the largest regions of chaos terrain on Mars. The image above was taken on February 9, 2019, and has since been followed up with a second image to create a stereo pair.

This is not the first landslide found in Hydraotes Chaos. I highlighted a similar slide on March 11. Both today’s landslide as well as the previous one likely represent examples of gravitational collapses as shown in this science paper about Martian ground water. Some scientists have proposed that Hydraotes Chaos was once an inland sea, and as the water drained away the loss of its buoyancy is thought to cause this kind of landslide at the base of cliffs and crater rims.

The past presence of water also helps explain the soft muddy look of this landslide. When this collapse occurred the material was likely saturated with water. Today it is most likely quite dry and hardened, but when it flowed it flowed like wet mud. Its size, almost a mile long and a quarter mile across, speaks to Mars’s low gravity, which would allow for large singular collapses like this.

Hydraotes Chaos itself is probably one of the more spectacular places on Mars. It sits at the outlet to Marineris Valles, shown in the image below. This gigantic canyon, which would easily cover the entire U.S. if placed on Earth, was the largest drainage from the large volcanic Tharsis Bulge to the west, where Mars’s largest volcanoes are located.
END_OF_DOCUMENT_TOKEN_TO_BE_REPLACED

The mysterious chaos terrain of Mars

In one of my weekly posts last month (dated May 14th) delving into the May image release from Mars Reconnaissance Orbiter’s (MRO) high resolution camera, I featured an image of what planetary geologists have labeled chaos terrain, a hummocky chaotic terrain that has no real parallel on Earth but is found in many places on Mars.

This month’s image MRO release included two more fascinating images of this type of terrain. In addition, the Mars Odyssey team today also released its own image of chaos terrain, showing a small part of a region dubbed Margaritifer Chaos. Below, the Mars Odyssey image is on the right, with one of the MRO images to the left. Both have been cropped, with the MRO image also reduced in resolution. The full MRO image shows what the MRO science team labels “possibly early stage chaos” on the rim of a canyon dubbed Shalbatana Vallis.