Peering into a Martian pit
February 28, 2020 at 1:44 pm Robert Zimmerman Points of Information 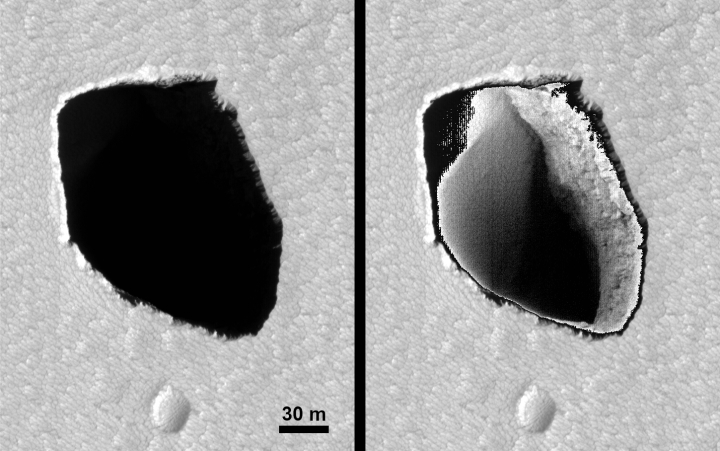 Cool image time! The science team for the high resolution camera on Mars Reconnaissance Orbiter last week released the above image of a pit to the west of the giant volcanoes Arsia and Pavonis Mons. The left image is without any adjustments in exposure. The right image has brightened the pit’s interior to bring out details in order to see what’s there. As planetary scientist Ross Beyer of Ames Research Center noted in his caption:

The floor of the pit appears to be smooth sand and slopes down to the southeast. The hope was to determine if this was an isolated pit, or if it was a skylight into a tunnel, much like skylights in the lava tubes of Hawai’i. We can’t obviously see any tunnels in the visible walls, but they could be in the other walls that aren’t visible. 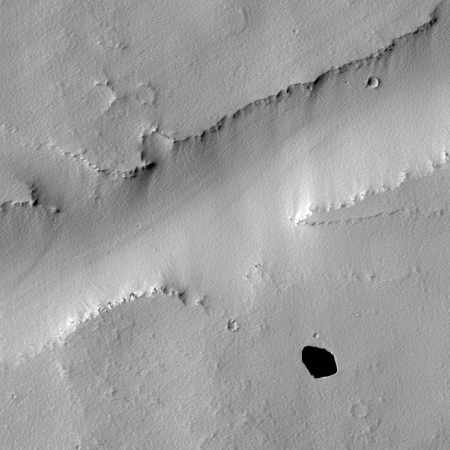 Because the image has been rotated 180 degrees, north is down. The northern wall of the pit appears to be either very vertical, or overhung. A tunnel might head north from here, but because of the angle of the photograph, this cannot be confirmed.

To the right is a wider look from the full photograph, showing the surrounding terrain, with north now to the top. In line with this pit is a depression that crosses the east-west canyon to the north. This alignment strongly suggests that a fault or fissure exists here, and that an underground void along this fissure line could exist. It also suggests that a deeper and larger void could exist below that larger canyon.

This pit, and the accompanying fissures, were likely caused by crack-widening along these faults, produced as this volcanic region bulged upward. 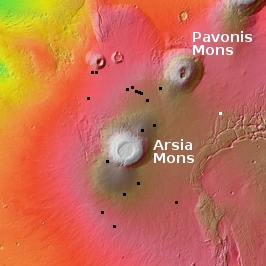 This pit is also one of the many many pits found near these volcanoes. The map to the right shows by the black boxes all the pits documented by the high resolution camera on MRO in the past few years, with this new pit indicated by the white box.

Beginning in November 2018 until November 2019 I was almost doing a monthly post reporting the new pits photographed by MRO. Since November however the number of new pit images dropped. This is not because every pit has been imaged, but because it appears they have completed their initial survey.

Below is a list of all those previous pit posts:

If you haven’t read these previously, spend some time looking at them all. The images (and possibilities for future exploration) are fascinating.