A collapsed Martian crater in a glacier?
September 1, 2020 at 12:43 pm Robert Zimmerman Points of Information 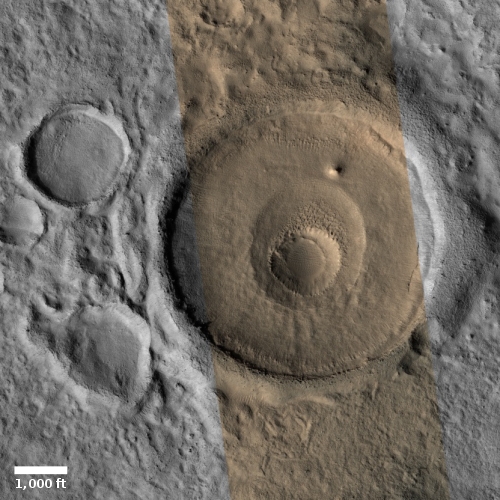 Today’s cool image to the right, cropped and reduced to post here, is another example of evidence that the mid-latitudes of Mars are covered with glaciers and ice. The photo, taken on April 25, 2020 by the high resolution camera on Mars Reconnaissance Orbiter (MRO), shows many of the squashed and blobby features found in these mid-latitudes.

What makes the image even more interesting is the small crater in the center of the larger crater. The floor of that larger crater seems filled with glacial fill, and it appears that when that smaller impact occurred it caused the nearby surrounding fill to collapse downward, producing the oblong off-center depression. At least that’s my uneducated guess, which I admit could easily be wrong.

Even if my hypothesis is wrong, the visual evidence here supports the theory that this region, dubbed Deuteronilus Mensae, has lots of buried ice glaciers. Consider for example the distorted crater to the southwest of the big crater. It sure looks like at some point it was heated suddenly, maybe by the impact of the main crater, so that its rim was warped and reshaped, in the manner that ice would be warped and reshaped by sudden heat. Moreover, all the craters in full image appear to have glacial fill.

The overview map below adds weight to this conclusion. 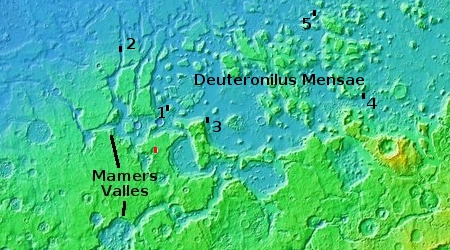 The red rectangle indicates the location of this photo. The numbered black rectangles indicate the following cool images, all of which strongly suggested glacial evidence.

The last post also included two links to research papers that had documented evidence of shallow ice and glaciers in this region.

Deuteronulis Mensae, located in the transition zone between the northern lowland plains and the southern cratered highlands, is part of what I call glacier country on Mars. Here in this chaos terrain of mesas and knobby hills evidence of ice and glaciers can be found everywhere.